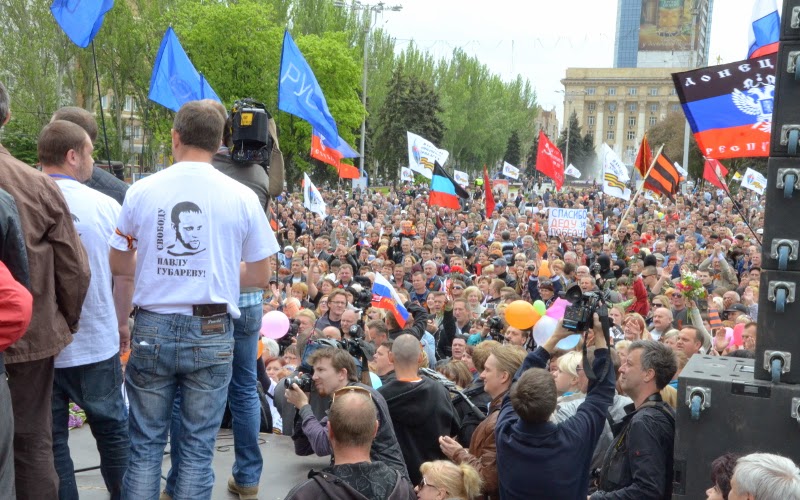 War in Ukraine is inter-regional, not inter-ethnic

Since the onset of the war in Donbass in April the western media has been in pains as how to describe the anti-government side. The rebels have sometimes been referred to as "separatist rebels", which is not necessarily accurate, and at other times as "pro-Russian rebels", which is accurate but is not saying much. Lately some commentators have settled on designating the rebels the "ethnic Russian rebels". This designation seems convenient and doubtlessly gives the outsiders a sense of clarity and certainty, but while it is not entirely inaccurate, it can be extraordinarily misleading.

Indeed, looking at the official population census one will found that Donetsk and Lugansk regions of Ukraine are home to 2.8 million Russians who constitute 40% of the population of the area. This gives the western observers unable to describe what the conflict is about something to fall back on. The rebels in Donetsk and Lugansk are Russians and they are fighting because they are Russians. The story becomes a familiar one of ethnic differences.

Trouble is Donetsk and Lugansk regions are also home to other 4.2 million people who declare their nationality on official population censuses to be Ukrainian. Despite this the Ukrainian government troops have not found themselves welcome by populaces of towns they have re-captured as it would be expected if this was really a fight of Russian against Ukrainian.

Unlike in some of the other inter-ethnic wars we have witnessed, nobody in Donbass, whether the anti-government rebels, nor the Ukrainian military is going house to house demanding to know if the residents inside are Russian or Ukrainian. It would be pointless to do so, because there is no indication that there is any visible difference in the political attitudes of census Russians and census Ukrainians in Donbass. They are either both equally supportive of the anti-government rebels, or else equally ambivalent about them. Instead, the Ukrainian military is happy to shell towns and cities on its path killing its nominally ethnic Russian and Ukrainian citizens alike, and the rebel militias (like the Ukrainian army itself) is composed of both census Russians and Ukrainians.

The truth of the matter is that while there is a difference between Russian and Ukrainian that furthermore, can be very significant in a given context, this simply is not the case in Donbass. Due to a number of social, geographic and historical reasons Donbass is a region with a character that is at once Russian and Ukrainian and where forcing a choice between just one of the two does not come naturally.

A polished version of my attempt at breaking down the Soviet WWII losses is now available. Aside from benefiting from much word editing, it is a tidier package also in the sense that all the constituent sections are now combined in a single PDF file, instead of being broken up into ten separate blog posts.

You may read or download it here: Breaking Down Soviet WWII Losses.

Posted by The Hero of Crappy Town 2 comments