The Holocaust, Anti-Partisan Reprisals and the Siege of Leningrad 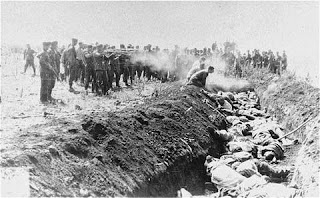 Compared to the other categories of Soviet civilian losses of World War II there are now relatively precise and reliable calculations for the number of Soviet Jewish victims of the Holocaust. Israeli historian Yitzhak Arad calculates there were between 2,509,000 and 2,624,500 civilian Soviet Jewish victims of the Holocaust, which makes for a mid-point estimate of 2.55 million.[29]

This estimate includes only direct victims of the Holocaust, and leaves out Soviet Jewish deaths in unoccupied USSR, for example among Jewish refugees from western USSR and in the Siege of Leningrad. It leaves out 120,000 deaths of Jewish Red Army men killed in combat, Jewish civilians killed in the course of battles such as the Siege of Odessa, as well as of the 80,000 Jewish Red Army soldiers who were killed in German captivity as Soviet POWs.

In response to partisan activity in a given area in their rear the Germans in the Soviet Union carried out what were essentially clearance operations targeting primarily the civilian population of the area rather than any local partisan formations. Areas deemed to be infested by partisans or „bandits“ were descended upon by security units and its population subject to mass killings and deportations. When the population of a given place was deemed to have been "infested" by partisan influence it was wiped out. It was the policy of eliminating civilian support for partisans by eliminating civilians.

The number of Soviet civilians killed in anti-partisan reprisals is highly uncertain. The German historian Christian Hartmann mentions a figure of 500 thousand, whereas the British historian Richard Overy mentions the figure in excess of 1 million victims. American historian Timothy Snyder talks of 700 thousand dead but that is for Poland and the Soviet Union combined.[30]

In the case that Soviet repression during the war caused no more deaths per year than in 1940, such a calculation would produce an estimate of Soviet losses directly due to the war, ie without losses due to Soviet wartime repression. However, the war actually brought about a great increase in the scale and the lethality of Soviet state repression.