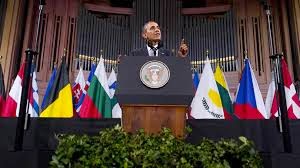 "Russia has pointed to America's decision to go into Iraq as an example of Western hypocrisy. Now, it is true that the Iraq war was a subject of vigorous debate, not just around the world but in the United States, as well. I participated in that debate, and I opposed our military intervention there."

"But even in Iraq, America sought to work within the international system. We did not claim or annex Iraq's territory. We did not grab its resources for our own gain. Instead, we ended our war and left Iraq to its people in a fully sovereign Iraqi state that can make decisions about its own future."

Other commentators have pointed out the absurdity of claiming the American invasion was supposedly more defensible of the two given the differences in bloodshed they entailed. The Iraq War resulted in approximately 500,000 deaths whereas the Russian seizure of Crimea resulted in the deaths of one Ukrainian serviceman and one Crimean militiaman.

There is another aspect in which Obama's statement is perversely ridicilous. He highlights as the redeming property of the Iraq invasion precisely the notion that makes US imperialism today so aggressive and unpredictable. That is its rejection of realpolitik and an addiction to pointless and unprofitable war. When Obama says: "We did not claim or annex Iraq's territory. We did not grab its resources for our own gain," what he is communicating is that unlike the Russians the Americans did not wage a self-interested war. By invading Iraq the US was not seeking to advance own national interest.

But this is exactly what makes US militarism such a scourge. Whereas a traditional power may only wage war that will serve its real political ends the contemporary United States, which is detached from this thinking, may wage war under any number of completely arbitrary and bizarre rationales. US military action ends up being called for for reasons as sacandalous as to "be seen to be doing something", to "send a message", or simply because "[the Serbs] needed some bombing".

I have a guest post on the correct libertarian position on the Russian seizure of Crimea over at The Libertarian Liquidationist. I make the point it is simultaneusly laudable and objectionable. This way to read it.
Posted by The Hero of Crappy Town 2 comments

Wartime Deaths Due to Soviet Repression 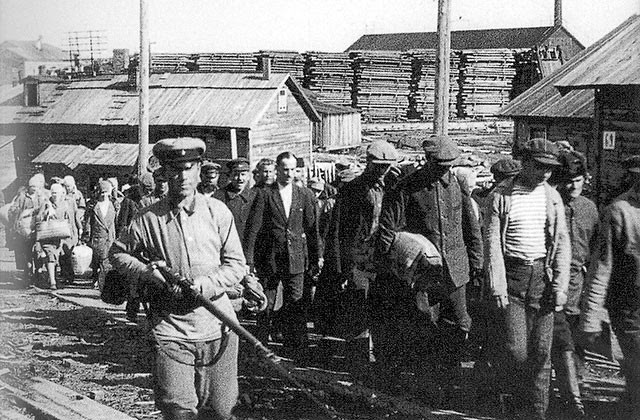 The Soviet Union under Stalin was a highly repressive state that engaged in repression of its citizens on a vast scale. Its repression was deadly and resulted in numerous deaths, even when the state had not explicitly set out to make repression lethal and to cause the death of those repressed. What is more, the four years of the Great Patriotic War were characterized by a sharp increase in the scale repression and the occurrence of deaths due to repression relative to most peacetime years under Stalin, including the immediate pre-war time.

Archival data shows the gulag administration in the years 1941 through 1945 presided over the deaths of 1.02 million inmates of whom 622 thousand prisoners in labor camps of the gulag, 312 thousand in labor colonies of the gulag and 85 thousand in prisons. The total number of deaths the gulag was responsible for in this time frame may be even higher on the account of deaths among former inmates who died after their release but as a consequence of the conditions they had been subjected to during their imprisonment.[18]

During the war mortality among the inmates of the gulag increased sharply so that one half of those who perished in the gulag did so in the war years, particularly between 1941 and 1943 and mainly of malnutrition related causes. German invasion of the USSR caused food shortages everywhere in the Soviet Union, however, malnutrition and the consequent mortality in the gulag was much more severe than among free Soviet citizens in the unoccupied USSR.

The most proximate cause of the crisis for the inmates of the gulag was that they were being kept imprisoned, mostly unjustly, with little aces to food, not that the Germans had invaded the Soviet Union and caused a general shortage of food. Had the regime released the inmates it was unable to feed they would have stood a far better chance of surviving than they did in the camps. This would have only benefited the war effort as a gulag inmate was only half as productive as a free laborer.

Internal Exile and the Labor Army

Another major category of Soviet citizens who suffered lethal repression at the hands of the Soviet regime during the war were deportees in internal exile. Deportees were usually stripped of their civic freedoms, lost most of their property and were often dumped in some of the most inhospitable parts of the Soviet Union condemned to live in "special settlements" that often did not yet exist and they would first have to build themselves. Besides performing labor in their colonies the exiles were routinely lent out to industries as unfree labor, or else, during the war, conscripted into the Labor Army . The exile groups experienced a far higher rate of mortality compared to the rest of the Soviet population, particularly in the first several years of their exile, after which their circumstances normally gradually improved.

The Toppling of Viktor Yanukovich: Guest Post at the Kremlin Stooge 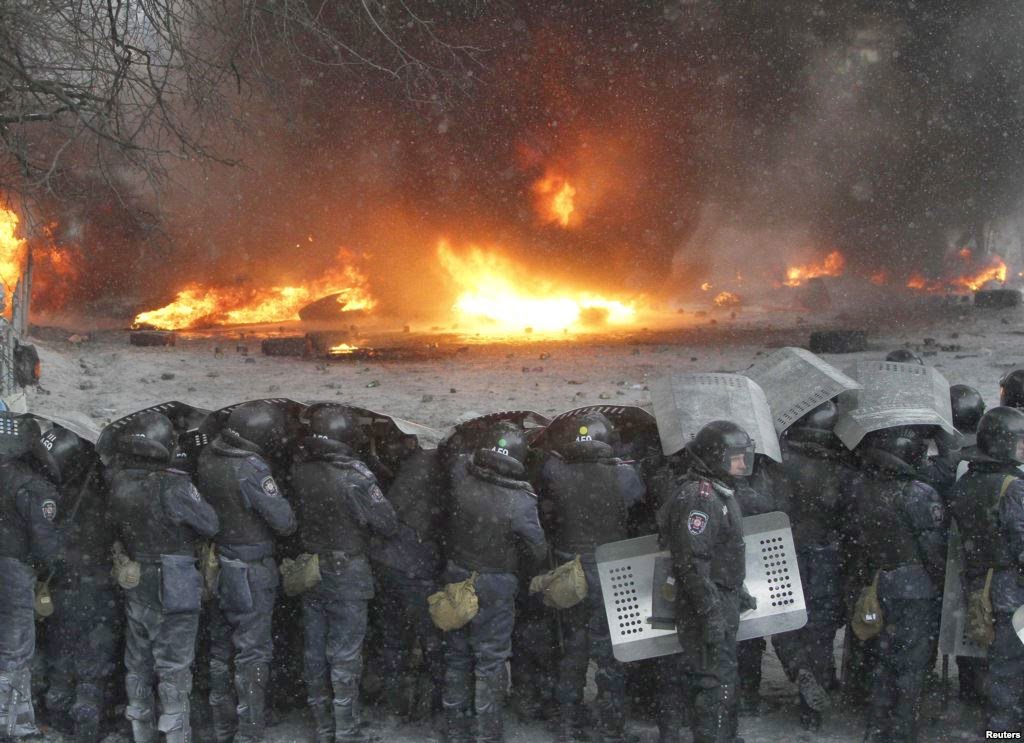 I have a lengthy guest post on the last month's overthrow of Yanukovich over at the excellent The Kremlin Stooge blog. Hop on over to read the piece and the lively introduction by the host.

Posted by The Hero of Crappy Town 2 comments 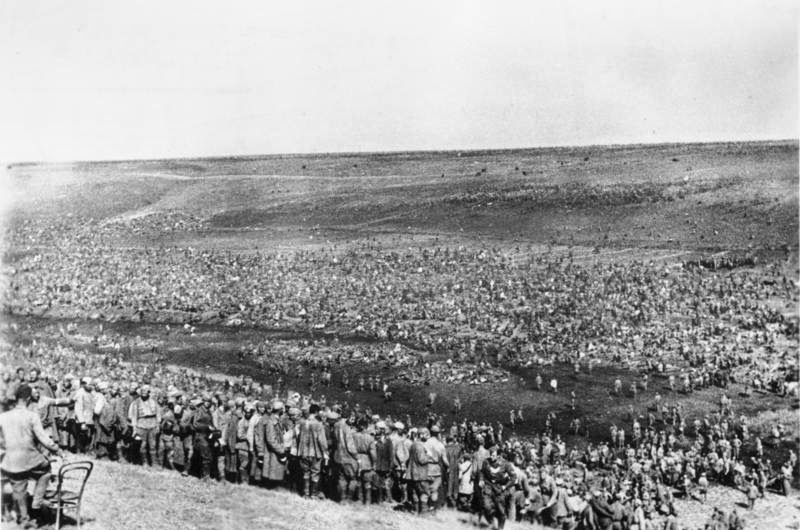 G.F. Krivosheyev reports that official records list 3.4 million Red Army personnel as missing. He himself calculates an additional 1.16 million missing personnel from units that were encircled and could not send out reports to the center. This nets a total of 4.56 million missing, but Krivosheyev estimates 500,000 of these never entered into captivity, but were killed beforehand. On the other hand he supposes that 500 reservists who were called up were captured by the enemy before they could be integrated into their units. This he allows for 4.56 million Soviet prisoners of war.

German estimates of Soviet prisoners taken, however, run up to 5.7 million. The huge discrepancy may be partially explained by German double counting and partially by the fact the Germans took captive thousands of militiamen and police not counted on Red Army rolls, and even more crucially — rounded up numerous civilians on the presumption some could be encircled Soviet troops attempting to avoid capture by shedding their uniforms, or else mobilized conscripts on their way to their units. For example, in the Kiev encirclement the Germans reported capturing 665 thousand prisoners of war. However, the entire Southwestern Front defending Kiev had only 627 thousand men on its rolls, of whom tens of thousands had successfully slipped out of the cauldron and therefore avoided capture, as well as another 150 thousand who had never been encircled by the German pincers in the first place. The 5.7 million figure of Soviet POWs is without a doubt an overestimate of actual captured Soviet soldiers and almost certainly still an overestimate of Soviet citizens captured by the German armed forces and treated as POWs.

In any case, the number of Soviet citizens who the Germans considered to be captured combatants (by no means had all actually been combatants, nor were they actually afforded the protections of a POW status) and who perished in German custody is most often given as 3.3 million. The figure stems from a German historian Christian Streit who arrived at the figure by taking the estimated 5.7 million captured as his starting point and then subtracted from it the number of those who were known to be still alive in German custody in January 1945 (930,000) and those who may have been released (1 million) or liberated (0.5 million).[13]

Streit's figure is problematic because he uses the inflated 5.7 million figure as his starting point. Starting instead with a different contemporary German estimate of 5.2 million total captives his method could result in a much smaller estimate of 2.8 million deaths of Soviet POWs in German custody. However, in the same way that Streit inputs an overestimate of total captives he could be using too high figures for those released and those liberated. Indeed he states that "at most" 1 million were released implying the number is easily smaller. Additionally the estimate of those liberated or escaped is from the Army High Command, which is the same body that produced the inflated 5.7 million estimate of the total. Using 5.2 million as a starting point and lowering the release and liberated figures by 20% Streit's method would result in a point estimate of some 3.1 million deaths among Soviet POWs in German hands, which is easier to defend.