It has been reported that 26 people have been killed in the recent outbreak of violence in Ukraine. 10 of those killed so far have been policemen. Majority of these have been riot police killed in violent clashes with the protesters, but at least two of these deaths occurred when a traffic police unit, which was not involved in suppressing the protests, was attacked by assailants.


"The Ukrainian Interior Ministry reported that seven police officers died of gunshot wounds during the clashes. Two additional officers were later killed and another was critically injured as a traffic police unit was attacked in Kiev. The police officers died while in pursuit of the offenders."

The majority of non-police deaths are presumably of protesters killed in the violent clashes with the police. However, at least two civilian deaths were of non-protesters. A journalist of a Russian-language daily was beaten with iron rods, then shot by masked assailants:


"A Ukrainian reporter has died of a gunshot wound after masked men attacked him on the way home in central Kiev. His colleagues suspect the attack was not accidental.

The journalist, Vyacheslav Veremyi, of the local “Vremya” (“Time”) pro-government newspaper died early on Wednesday morning of a gunshot to the chest while doctors were trying to save him."

Additionally, an office worker perished in a fire when the protesters stormed and set fire to the building of the Party of the Regions in Kyiv:


"Protesters also attacked the headquarters of President Yanukovych's Party of the Regions, temporarily smashing their way in and setting it on fire before being forced out by police. One person - believed to be an employee - was found dead inside."

Meanwhile the Swedish foreign minister Carl Bildt has reacted to the violence by stating:


"We must be clear: Ultimate responsibility for deaths and violence is with president Yanukovich. He has blood on his hands."


"From this moment on, the USA holds Yanukovich responsible for everything that happens in Ukraine."

It is enormously curious the West would choose to blame all the violence on the government of Ukraine. Even though the most radical elements of the protest movement in Ukraine have taken to torching office workers, attacking traffic police, and possibly murdering journalists this is all ultimately the fault of Yanukovich.

What is being communicated by the Western officials is that the Ukrainians squaring off against the current government may do no wrong even when they are engaged in the killing of defenseless civilians. That means that if more journalists or office workers are murdered by extremists, it is the Western officialdom – not the Ukrainian government – that will be in large measure responsible for their deaths.
Posted by The Hero of Crappy Town 1 comments G.F. Krivosheyev established Soviet records indicate the "deadweight" losses of the Soviet military in the Soviet-German war amount to 8.69 million dead. It would be erroneous, however, to take the figures indicated by these incomplete records at face value, as synonymous with actual deaths among Soviet military personnel.

To highlight just one problem. Krivosheyev suggests the Germans took 4.06 million Soviet military personnel prisoner of whom 2.96 million survived their ordeal, while the other 1.1 million perished in German custody. In fact, we know that more than 3 million Soviet citizens the Germans had designated prisoners of war died. Even allowing for the fact many of them were not military personnel, but instead civilians and partisans, the number of Soviet Red Army men who perished after they fell into German hands must have been far greater than 1.1 million.

Ellman suggests there are other factors Krivosheyev's figures do not take into account. One is the fact that given peacetime mortality rates among the age groups making up the Red Army personnel there would have been 400,000 deaths among their number even in peacetime. Another that there would have been Soviet soldiers captured by the Germans who were subsequently released or escaped, but who were not reinstated into the Soviet military due to their disability, avoidance of conscription, or age. He estimates their number may have been 300,000.

The first of these points by Ellman is less valuable than the second, particularly as it pertains to the projected 100,000 "natural deaths" among Soviet POWs. If we know the life expectancy of a Soviet prisoner of war taken by the Germans was usually extremely low (in 1941-42 when most were taken it was only a few months) it is the case they simply would not have had the time to die a natural death in captivity, before they died of other causes. It is irrelevant if thousands of Soviet soldiers taken POW would have died anyway in 1941-1945 of other causes, if their life was cut short when they were left to starve in Wehrmacht's POW camps in 1941/42. Ellman's other point is pertinent. The number of POWs who survived captivity must be greater than the sum of POWs who were reinstated into the Red Army before the end of the war, of those who were returned to the Soviet Union at the end of the war, and of those who emigrated.

Krivosheyev figures, however, are nonetheless the best starting point in determining the extent of non-repression deaths among Soviet regulars — that is excluding deaths of Red Army men in German POW camps and at the hands of Soviet military tribunals. According to their records the Red Army and the NKVD sustained 5.23 million killed in action, 1.1 million died of wounds, 270 thousand died of disease, 290 thousand died of remaining causes such as accidents, suicides or were executed after a court martial. Additionally there were 500 thousand Soviet soldiers who went missing, but who Krivosheyev suggests were killed in fighting. Altogether this gives a figure of 7.39 million Red Army and NKDV non-POW dead. 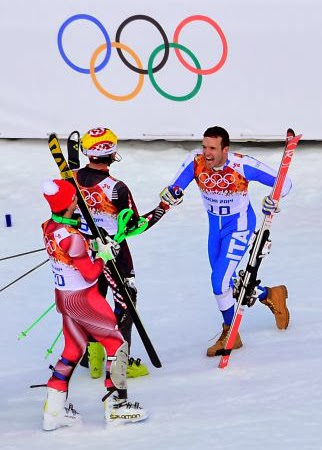 Croatian alpine skier Ivica Kostelić, who has captured a medal on each of the last three Winter Olympics, in talk with USA today on his impression of Russia and the games in Sochi:


"Since I am Slavic, I understand parts of Russian language and maybe this whole culture is a little closer to me. Maybe this sounds crazy, but Russia is a great nation. I know there is a lot of criticism over some stuff. But sometimes we shouldn't compare the western way of thinking and the Russian way of thinking. Besides that, these Olympic Games are very good. We heard a lot about security is going to be very tough. But actually I hardly notice that it is tougher than Vancouver or Torino. The people are very friendly, and I think these Games so far have been good, a success."

Another in a line of participants of the Olympics who feels they games and the host nation are alright and the "Sochi haters" (or is it Russia haters?) don't have a leg to stand on.


Mark Adomanis, the popular Russia blogger over at Forbes writes:


"I personally think that Pussy Riot should have gotten off  without any punishment whatsoever because their actions didn’t harm anyone and because there is no “right” for religious observers not to be offended. The idea that churches should somehow be excluded from free speech protections seems to be a very dangerous one, and so Pussy Riot should have faced the same “consequences” they would have had they given their performance on a street corner (i.e. nothing)."

Adomanis gives this in a post commentating on the "hilarity" that ensued when Samantha Power, the United States’ ambassador to the United Nations, misunderstood the challenge of her Russian counterpart Vitaly Churkin and tweeted she would be proud to go on tour with Pussy Riot, presumably taking her from the National Cathedral in Washington, to St. Peter’s cathedral in Rome and the Wailing Wall in Jerusalem as suggested by Churkin. Indeed it is hilarious what an airhead Power revealed herself to be in totally missing Churkin's point.

At the same time, however, Adomanis reveals himself to lack a comprehension of something very basic himself, namely of property rights. Independent of any right for religious observers not to be offended, there exists a basic right of property. A church is not un-owned public space. A church (the building) is property that belongs to its church (the organisation) and its congregationn and is made open to the public for certain purposes. Eg, anyone who wants to offer a prayer or admire the architecture is usually welcome by the owners to come in and do so. However, if one enters instead with the intent to steal, or to hurl insult at the religious sentiment of its congregation then such a visitor is an unwelcome intruder — a trespasser knowingly trampling upon the property rights of its victim.

There is in fact a world of difference between shouting obscenities on a street corner and in a church. To guarantee the "right" to insult religious observers from within a church, there would have to exist an intuitively indefensible situation where the law enforcement would actually have to attack the right of religious organizations to manage access to their property including being able to revoke welcome. Taken to its logical conclusions it leads to justification of utterly bizarre scenarios, such as of armor-clad riot police clearing a path through lines of religious observers at a church, so as to enable fringe professional provocateurs access to the altar, so that they may exercise their "right" to better make themselves offensive to believers by purposefully insulting religious sentiment from within the house of god.


Posted by The Hero of Crappy Town 4 comments