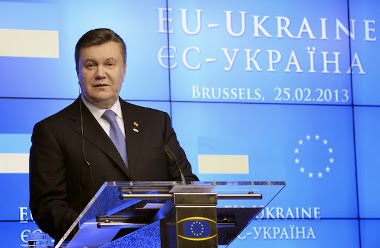 Ukrainians are right to not want to join the Customs Union with Russia, Belarus and Kazakhstan

According to research conducted in November by the Kyiv International Institute of Sociology only 37% of Ukrainians support the idea of Ukraine joining the Customs Union of Belarus, Kazakhstan and Russia.* A more recent poll from December has the figure of 36%. Ukrainians are right in being unenthusiastic about joining this arrangement.

The Russian-led Customs Union is as much a protectionist bloc as it is a free-trade zone. It abolishes custom fees between member-states, but also maintains hefty tariffs for imports originating in third countries. The Custom Union import tariffs are only slightly lower than the Russian tariffs they replaced and much higher than the tariffs Ukraine collects now.

By joining the Customs Union Ukraine would eliminate artificial, state-imposed barriers to trade with Russia, Belarus and Kazakhstan. However, it would simultaneously have to accept additional, Customs Union-imposed barriers to trade with third states. It is doubtful the elimination of tariffs and customs checks on the border toward Russia and Belarus could offset the loss of trade with the rest of the world with which the Ukraine currently conducts 65% of its trade.

Even if it could, however, it simply does not make long-term sense for Kyiv to place itself in a position where it may not set custom duties by itself, but where it is tied to more protectionist-minded Moscow, Astana and Minsk instead. That said the Customs Union could become more appealing in the future if it were to dramatically reduce tariffs.

Popular support for EU membership in Ukraine is actually rather weak

Media coverage has focused on the pro-EU protesters in Kyiv, but in reality these speak for fewer than one half of all Ukrainians.

45% of Ukrainians support the recently-negotiated EU Association Agreement. The support for the eventual (and at this point very much hypothetical) EU membership is at a similar level. A November poll has it at 39%, while a more recent research suggests the figure of 46%. In either case this actually represents a very low level of support for EU integration