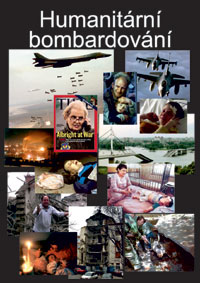 Madeline Albright is another US policymaker who has outed herself as an anti-Serbian chauvinist. Her charming exclamation the other day ("disgusting Serbs") puts her right there with the most candid of them, Richard Holbroke ("murderous assholes") and Joe Biden ("illiterate degenerates").

As Albright was promoting a book of hers in the Czech Republic the members of a local society, the Friends of Serbs in Kosovo, pulled a Jeremy Scahill on her and attended her book signing in Prague, but asked her if she could sign, not her book, but "her other works that made her famous in the Balkans", meaning the posters with images of the consequences of her policies they had brought along. Rather than attempt an inept and panicked defense like Wesley Clark had done when famously confronted by Scahill, Albright tore up the posters, stood up and shouted, and in the end proclaimed the Czech activists to be "disgusting Serbs".

That is some heavy stuff objectively speaking. That is in the sense that if Albright were to utter an equivalent, say "disgusting blacks" she would rightfully create many problems for herself and tarnish her reputation with the guardians of political correctness in her country. But since she only revealed her revulsion for the Serbs it will have no consequence of that sort. This is because anti-Serbian bigotry is not actually politically incorrect.


It should be kept in mind that the anti-Serbian hysteria of the 1990s had not been generated by rogue hate merchants well beyond the margins of polite society, in the way anti-black, anti-Jewish, or anti-Muslim chauvinism are. It was generated by mainstream liberal politicians, intellectuals and journalists, which is to say by the very people who think of themselves as the indispensable guardians of political correctness and are otherwise the first to pounce on anything culturally insensitive or racist. In fact expressing revulsion for the Serbian people (aka 'Milošević's willing executioneers') has perversely been one way for public figures to cement their PC-ness and to demonstrate their moral righteousness with the PC crowd in America. Contempt for the Serbs as such never put one outside trendy, polite society, it could actually help one get in.

While that is offensive, no one needed to care, if it was not that that type of attitude had real life consequences. In the first place a fact must be faced that Western intervention in the Balkans was not driven only by considerations of power and geopolitics, but also a straightforward feeling of hatred and malice against the Serbs, which is evident from the number of high-ranking officials who at the time, or since have revealed themselves to harbor such feelings. In the second, the xenophobic attitudes toward the Serbs determined what the intervention could get away with. We may recall that NATO conducted its bombing of Yugoslavia in an atmosphere where Thomas Friedman of the New York Times could, openly and without repercussions for his reputation, demand the bombing be conducted in a less surgical manner so as to kill a greater number of civilians, and his counterpart at the Washington Post, Charles Krauthammer could hail Serbian civilian deaths. Crazy and vicious stuff, but coming, not from some obscure KKK newsletter, but from Pulitzer Prize-winning opinion makers, writing for the two biggest American regime dailies.

Read more »
Posted by The Hero of Crappy Town 5 comments