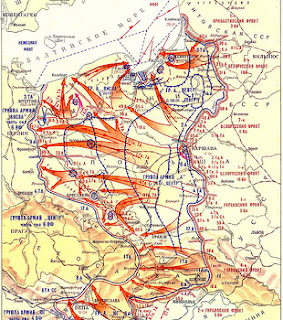 One thing I left out of the review of The Japanese-Soviet Neutrality Pact below and the book mentions is that it is very likely that in late 1944 the USSR was passing information obtained by espionage against the Western Allies to Japan. Stalin likely decided to do this for fears that Japan may capitulate to the Western Allies before he was ready to attack it himself, which would deprive him of the opportunity to get the Soviet Union into a needless war that would cost it 35,000 casualties.

It is not known how good a use Japan made of the information received from the Soviets, and if Moscow in acting this way indeed prolonged the war in Asia and the Pacific as Stalin had intended. What is certain, however, is that Stalin was successful in purposefully prolonging the war in Europe. He did so when he stopped the fantastically successful Vistula-Oder Offensive when it was apparent it could have reached Berlin in February 1945 virtually unopposed.

Having launched the Vistula-Oder Offensive on January 12th the Red Army made fantastic progress and covered hundreds of kilometers in just a few weeks. By February 1st it had secured multiple bridgeheads on the Oder river which placed it 700 kilometers to the west of its initial positions on the Vistula and a mere 60 kilometers away from Berlin (the Western Allies were still 500km away on the Siegfried Line). Due to how speedy its advance had been and how many German forces it had swept away in the course of its advance the Red Army now gazed at the approaches to Berlin that were only very lightly defended. Accordingly, the Soviets begun the second phase of the winter campaign on the Berlin strategic axis. They were to drive forth again, after only a few days of respite and punch through to reach and take the city as quickly as possible.

It was not to be. As David Glantz, the preeminent American historian of Soviet military operations in WWII explains (1, 2), on February 8th, or thereabout, Stalin suddenly halted the renewed advance in its early stage. The Soviet dictator directed the Red Army forces involved to concentrate on Pomerania and Silesia instead, and transferred others to Hungary from where the Soviets would advance on Vienna. By the time the drive on Berlin was resumed two months later, just a day after Vienna had been taken, the Germans had had time to regroup and a much harder fight awaited the Soviets to reach and take the German capital. In the various offensives that the Soviets launched after the February advance on Berlin had been aborted no fewer than 290,000 Soviet troops were killed and 960,000 were wounded. Many of these losses could have been avoided, but for Stalin's decision to pass over the opportunity to take the Hitler's lightly-defended capital and go for well-defended secondary targets instead.

What likely happened was that Stalin, with an eye to the post-war situation, postponed the taking of Berlin and the final defeat of Germany until the Soviet forces would occupy the greatest extent of territory in Europe possible. He seems to have been particularly interested in occupying a hefty chunk of Austria. Typically for Stalin he, even as the victory was at hand, did not fail to find a way to throw an obstacle at the feet of his Soviet forces and aid the enemy. Previously he had over and over again needlessly depleted Red Army strength and energy by expecting it to attain operational goals that were ridiculously overly-ambitious and glaringly impossible. Yet now that a dash of boldness had never made more sense he, to the shock and dismay of Soviet commanders like Konev, Rokossovsky and Chuikov (but not of Stalin's favorite, Zhukov), had the forces on the Oder prevented from taking the advantage of the opportunity they had created for themselves.

What Stalin's asinine strategic thinking made certain was that in the last months of the war the Soviet troops could perish not only in the taking of the German capital, but also to take places like Vienna, Silesia and Pomerania. This may not have been necessary if Berlin was captured first, as the Germans were likely to give over the fight soon after that and allow such areas to be taken over without a fight. Even if that were not to happen it still made no sense to fight the Battle for Berlin in April after the Germans had amassed there instead of in February when the city's surroundings were half-empty. As it was many thousands of Soviet soldiers who could have lived never came home so that Stalin could be satisfied he would end the war with an occupation zone in Austria.


PS, Glantz's lecture and the accompanying paper I learned this from are very worthwhile. In them the scholar also addresses the often-made claim the Soviets sat on their hands for the duration of the Warszaw Uprising. In fact they in a move that was tactically ill-conceived sent a whole tank army (2nd Guards) to advance on the city, but the force was badly mauled and lost 80% of its tank strength and was forced to abandon its attempt. Another myth Glantz sheds light on is the often-made claim the Axis invasion of Yugoslavia and Greece delayed the German invasion of the Soviet Union. In reality the Germans were waiting for an end to the wet season in the western Soviet Union anyway, and attacked at the earliest time when a lightning invasion of Belarus, Ukraine and western Russia is feasible.
Posted by The Hero of Crappy Town