What follows is a review of a book, The Japanese-Soviet Neutrality Pact, from the pen of the Russian diplomatic historian Boris Slavinsky. The book is a little dry at times, but that is to be expected considering the source material it tasks itself with bringing to light is mainly made up by reports from diplomats. Despite that there are pieces of very important information in there, some of which may not be found anywhere else. Here are some of the things I learned reading it:


Community is a sitcom that takes place at a fictional American community college. Here is a transcript of the conversation from a scene from its 2nd season episode Custody Law And Eastern European Diplomacy:


Britta (female lead): Oh, I'm so sorry, but could you just not tell Troy and Abed that we went out tonight.

Lukka (one-time character for the episode): No problem.

Britta: It's just that they're really worried if you and I, you know... see each other that it's somehow going to affect your friendship with them

Lukka: Hey don't worry, don't worry. I can keep a secret. I'm from the Balkans there are many things I try not to talk about.

Britta: [sighs] Lukka, I know it. I know there is pain in there. Just so you know you can talk to me about anything

Lukka: [sighs] So much killing. The corpses stacked like firewood, the rivers red with their blood. I miss it so much.

Britta: [begins to kiss him then yanks away suddenly] Wait, just to clarify, when you say you miss it it's like you have survivors guilt, like you wish you were back over there defending your motherland right?

Lukka: Yes, I miss cleansing our fields and forests of the unclean people who stole my country. I miss the smell of villages burning. [laughs] I miss the way they used to run from our tanks in fear. [Is interrupted by a trumpet sound] Ah damn it, my neighbor is Jazz musician. Hey Spencer, come on now, I got woman in here. [knocks on the wall of his apartment, but the trumpet keeps going at it] Great, he really knows how to kill the mood.

So then we have a storyline based around a comedic twist where beneath the appealing exterior of a seemingly friendly and outgoing person, lurks the black heart of a Balkan genocidiare. It's pretty punchy for a sitcom, you have to give the writers that. I suppose an appropriate tagline for their plot would be "If you're dating a boy from the Balkans make sure he doesn't enjoy ethnic cleansing". 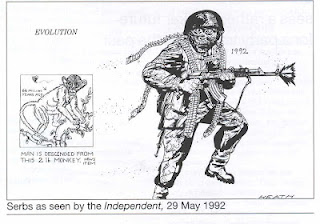 The Herald (a Scottish broadsheet) on the manager of the Serbian national football team (link):


"SUCH is the reputation of Sinisa Mihajlovic that one could forgive the SFA if bars are being hastily erected around the technical area at Hampden in deference to the imminent arrival of the Serbia coach."

Yepp, you read that right. A serious, "quality" British paper has no problem suggesting it would be fine to cage their guests from Serbia when they come over to take part in a sporting event. You may think suggesting some people may be treated with as with apes would be just a tiny-bit politically incorrect in 2012, but if some people happen to be Serbian, you would evidently be wide off the mark.

(The quote is a byline to a poor background article on the manager of the Serbian national football team published in the build up to the football match between the national selections of Scotland and Serbia that was held yesterday in Glasgow. The Scottish Football Association showed more class than that and despite the indulgence granted by The Herald treated their guests with hospitality and dignity, not enclosing their opposition's manager with a cage.)