Massacre in Kandahar or: How Did 'Our Bobby' Become a Serb?


One major part of media reaction to the Kandahar Massacre has been to explore the perpetrator's all-American background. We learn Robert Bales is suburbia-bred, former high school footballer, a family man, a patriot, even a local hero. He may have 17 charges of murder to his name, but the media can not help themselves but humanize Robert Bales, American child killer.

It points to the US media's fascination with an apparent contradiction — how could 'one of us' ever be a war criminal? It isn't that the media is trying to garner sympathy for Bales, or outweigh some of the bad with the good as some have suggested. Instead the media is echoing the mystification of America as to how one of its own could behave like a foreign psycho. If Bales' former Cincinnati neighbors reacted to news of the massacre with disbelief it could have been perpetrated by their 'Bobby', the media have been similarly mystified as to how come an American could ever commit an equivalent of throwing babies out of incubators.

One answer that is emerging and threatening to become the definite one is the narrative of Bales as an all-American on the outside, but in fact an outsider to American society. Some reports are determined to paint Bales in this manner. We learn that he may have been a family man, but he had also assaulted a woman! He may have been a patriot, but he also defrauded pensioners! He may have been a four-tour combat veteran, but he was trying to keep from being deployed again on the account of a possibly minor injury! He may have been on a high school football team, but he was not its biggest star! (eek!) He was strange from the start, and only seemingly fit in, but beneath the veneer of all-American normalcy lay a black sheep (!), is the message.

True or not, none of this is very relevant. What if indeed Bales was flawed? He was nonetheless good enough for the American government to pay him tens of thousands of dollars for his service per annum. Good enough to put on a US Army uniform and make sergeant. Good enough to earn a dozen US Army medals, ribbons and badges. Good enough to be, we can safely assume, on many occasions approached by strangers eager to thank him 'for his service'. Good enough to receive rounds of applause on planes, as American soldiers often are, and be thrown parades. Good enough to be handed a rifle and shipped to Afghanistan to wield power over ordinary people there leading peaceful, civilian lives. Denial that Bales fit in the American mainstream is critically undermined by the fact many of the same people who would now disown him as a renegade, would have just weeks ago swooned over him as an American military man.

Bales is undeniably an all-American then, yet the other day The New York Times had to refer to him as a "war crime suspect". When you consider that a "war crimes suspect" (always plural) is a term normally reserved for Serbs, Bosnian Croats and Africans, a term ubiquitous in the coverage of the Balkans, but never ever applied to Americans, you can understand the mystification the massacre has posed to America. It is a produce of an incredible level of willful self-delusion.

Email ThisBlogThis!Share to TwitterShare to FacebookShare to Pinterest
Labels: America

The Feats of the Soviet Arms Production: How Did They Do It? 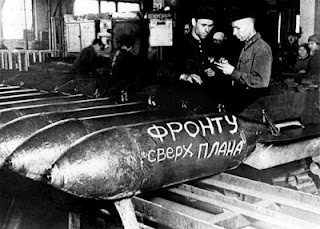 In 1942, the grimmest year of the Second World War, the Soviet Union could produce only a quarter of steel and coal produced in Germany. The size of the Soviet industrial workforce at that time was one half of the pre-war high of 12 million. At its low after the Axis summer offensive it temporarily fell to just 5.5 million. The size of the German industrial labor pool at the same point in time was 11.5 million, down slightly from the pre-war force of 13.6 million workers.*

Despite this the Soviet Union outperformed Germany in production of most every category of weapons, save ships, and did so for every year of the war, including 1942. In that year the USSR produced 25.000 aircraft to Germany's 15.000, 24.000 tanks to Germany's 9.000, and over 49.000 pieces of medium and heavy artillery to Germany's 12.000. How was the Soviet industry able to perform this outstanding feat?

One possible answer could be the support in raw materials, transport vehicles and technology provided to it by the USA under the Lend-Lease act, but this fails to explain the performance of the Soviet industry in 1941 and 1942, before Lend-Lease had had any meaningful impact. Another explanation could be the slightly lesser level of mobilization of German industry for the needs of the war effort before 1943/44. This, however, fails to explain how come the Soviet Union was able to outproduce Germany even in the pre-war years when Germany had a higher portion of its industry labor for the needs of rearmament than did the Soviet Union. Finally it could be claimed the difference had something to do with the Allied bombing of German cities, but actually there is little evidence of Allied strategic bombing succeeding in disrupting German production before late 1944. So while all these arguments help answer the question, even taken all together they do not provide a fully satisfactory answer.

It must be then that, at churning out vast quantities of weaponry, Soviet armaments industry was, for whatever reason, simply better than its German counterpart. Though it may sound counter-intuitive to some, laborer for laborer the Soviet, fully state-run, industry was hands down more efficient at supplying its military than its German counterpart that was ostensibly state-run to a lesser degree.

Read more »
Posted by The Hero of Crappy Town 5 comments