The Siege That Wasn't 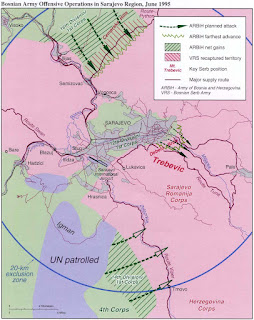 Weeks ago was 6th of April, the anniversary of the Axis invasion of Yugoslavia. The global press focused on 6th of April as a different Yugoslav anniversary, however. News outlets all over the world (eg the BBC, Al-Jazeera, the Associated Press), spent the day reporting it marked 20 years since the beginning of a four year siege of Sarajevo. But did it really? Without a doubt what has been dubbed The Siege of Sarajevo begun on 6th of April 1992, but was that event really a siege?

It is said The Siege of Sarajevo was the longest siege in modern history, having lasted until February 29th, 1996. This is interesting because the war in Bosnia and Herzegovina formally ended on December 14th, 1995, and was de facto over by November 21st, 1995. This means there is a claim Sarajevo was subject to a siege which actually outlasted the war by three months.

The Bosnian Serb Blockade of Sarajevo

By common sense definition a siege is a military blockade of a fortress or a city maintained for the purpose of capturing said fortress or city. The city of Sarajevo was until February 29th, 1996 encircled by Bosnian Serb troops, but not every encirclement or blockade is a siege. A blockade that is not enforced for the purpose of capture, but is instead its own purpose is just a blockade.

The truth of The Siege of Sarajevo is that the "besieging" Bosnian Serb Army had neither the ability nor the intent to ever capture the city. The Bosnian Serb forces around Sarajevo were significantly outnumbered by the Bosnian Muslim forces inside the city. The advantages the Serbs held and which enabled them to keep Sarajevo bottled up was a one-sided superiority in artillery and control of the elevated terrain around the Sarajevo basin. Neither of these would have counted for much if they ever attempted to take the city block by block, however.