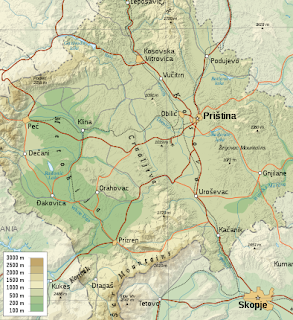 News pieces concerning Kosovo in Western outlets will seldom go without mentioning that Albanians make up 90 percent of its population. Pick a Kosovo-themed news piece at random and it is likely its background paragraph will include a phrase like "Kosovo's 90 percent Albanian majority", "Kosovo is 90 percent ethnic Albanian" or "Kosovo, whose population is 90 percent ethnic Albanian". In fact such assertions regularly found their way into news reports before the massive expulsions of non-Albanians in 1999 actually made this the case in reality. Particularly around the time of NATO attack on Yugoslavia, but even as early as 1990.

It is easy to determine why a typical background paragraph in a Kosovo story, will include this information, but little else. The purpose is to frame the story as dealing with a territory that is for all intents and purposes Albanian. It is ultimately intended to elicit a response of disbelief at the cheek of the Serbs for even claiming it as their own, or for having it included in their state in the first place. This particularly seeing the same reports will, if at all, describe the Serbian attachment to the territory as stemming from the fact it was at one point a part of the Serbian medieval empire, and a place of a certain large 14th century battle. Arguments then, which if truly formed the basis of Serbian claim to Kosovo would indeed point to its exceeding weakness.

Demographics of a contested region indeed provide the strongest possible argument for a claim over it. As such some information of such nature should probably be a part of any report from a trouble zone like Kosovo. When that information is reduced to a tiny tidbit such as "90 percent ethnic Albanian" it may, however, be leaving out a great deal and be potentially misleading. Imagine, for example, an eight-unit apartment building. Let us say that six of the apartments are owned by Chileans who each live alone. That the other two apartments, on the other hand, are occupied by two separate Norwegian families each with nine members. In this case for every Chilean occupant of the building, there are three Norwegian occupants. Having in mind the structure of the ownership, however, would it make sense at all to say this apartment building is mainly occupied by Norwegians and leave it at that?

Reality of the matter is that Kosovo is as Serbian as South Dakota is Sioux (and in much the same way). Essentially all the place names in Kosovo are of Serbian origin. The only toponyms with Albanian names are of settlements that are exceedingly recent. The name "Kosovo" itself is Serbian. There is no Albanian name for it, instead the Serbian name is used slightly adapted. This is only natural seeing that there is no record of mayor Albanian presence in the territory before the 18th century. Serbs have lived in Kosovo since there was such a thing as a Serb, but Albanians are largely newcomers from the highlands to the west, in northern Albania.

To Albanians Kosovo started out, not as a home, but as a place to raid. As many other tribal highlanders the tribesmen of northern Albania nurtured a raiding culture. For the prospect of plunder and recognition they would raid each other, as well as organize annual incursions into lowland Kosovo. Serbian agriculturalists there were hardly the only such in the world at the time to be subject to recurrent raiding. Many such populations prospered regardless and eventually made themselves impervious to such attack. Situation of Christian Serbs in Kosovo was uniquely precarious, however, since they were required by Islamic law in force in the Ottoman-ruled Balkans to go unarmed. With them unable to defend themselves the most exposed areas gradually cleared of their Serbian inhabitants who fell back to safer areas. Albanians attracted by the superior land in the lowlands moved in their stead, thus beginning the process of ethnic shift in Kosovo.