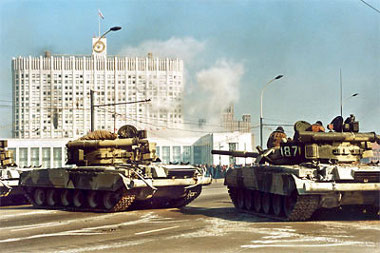 What a difference 19 years or so makes. The coverage of the recent anti-government rallies in Moscow in the Western press has been extensive and hugely positive. News piece after news piece put the rally organizers' attendance estimate in the headline, remembered to point out that participants had braved extreme weather to attend, and humanized the protesters by reporting on their white ribbon symbol, their chants, placards, their demands and backgrounds. Many also generously labeled the protests "the largest since the collapse of the Soviet Union".

Compare this to the treatment by the Western media of Russia's other massive demonstrations since the collapse of the Soviet Union — the 1993 rallies in support of the Supreme Soviet of the Russian Federation. When Boris Yeltsin initiated his presidential coup against the Supreme Soviet tens of thousands of citizens turned to streets in revolt. Yeltsin responded by ordering force, but protesters stood their ground. Instead in most places it was Yeltsin's police which gave ground. Before long a mass of fifty to one hundred thousand people enraged by attempted violent suppression was seemingly unstoppably conquering Moscow's streets, as initially combative police essentially hid. The protesters' fortunes changed, however, when they failed to overcome live fire to take over Ostankino state television center and when Yeltsin rallied the military to his side, and armor and special forces units joined the bloody crack down.

Western governments backed Yeltsin through the putsch to the hilt, and the Western press followed their lead. According to them Yeltsin throwing the last pretense of the rule of law to the wind to dissolve the parliament — which the Constitution and the Constitutional Court were explicit he could not do and remain the president — was a "bold gamble" against "obstructionist" legislature, a part of "his attempts to break Russia out of its history of authoritarian rule". To hear them tell it what happened next was essentially that "pro-Communist demonstrators" — an instantaneously disqualifying characterization, particularly in 1993 — went on a "rampage in Moscow" in support of "rebel legislators" engaged in an attempted "coup", which if successful would have resulted in "turning the clock back on Russia's uncertain march toward democracy".

Western anglophone media could not have been less charitable to the Moscow protesters. The most hostile reporters and columnists spoke of a "Moscow mob directed by Russian totalitarianism's last-gasp fanatics", of "the rag-tag Communist rabble supporting the parliament", of "Rutskoi's ragtag army of Communists, neo-Nazis and just plain hooligans dedicated to restoring the old Soviet Union", of an "unruly band of malcontents - ranging from anti-Semitic fascists and nationalists to fervent monarchists and hard-line Stalinists", or of "neo-fascists, Stalinists, priests, and Cossacks crying out in unison". Contempt for Russians who had turned to street demonstrations was palpable.

The spotlight was kept firmly on the more ideological participants, particularly the most extreme ones, and away from the majority of the people on the streets who were not ideologically committed. Much was made of the fact protesters could be of very different political persuasions. This was important to reporters, not because it would show that Yeltsin's policies were unpopular across the political spectrum, but because it indicated protesters opposed Yeltsin for different reasons. The size of the protest was low-balled. Where non-Western reporters' estimates went up to 150,000 their Western colleagues found only "a few thousand", "10,000" or at most "15,000" protesters.

Furthermore, while the news pieces mentioned that many people were killed in the event (usually transmitting only the government's casualty figure), they never deigned to point out the casualties were overwhelmingly among the protesters. In their reports government forces never opened fire on demonstrators, gunfire simply "broke out" as rioters moved against police. Nobody was shot and killed by Yeltsin's troops, people simply "died" as protesters attacked government buildings.

This being the case the new-found appreciation of the mainstream media in the US and the UK for Russian mass protest is refreshing and welcome. Russian anti-government protesters certainly deserve to be treated fairly, but the turnaround goes to show the extent of slant and insincerity in the news served to Western audiences.

Though again people of very different ideological persuasions are marching, some of these being rather distasteful and extreme, there has been precious little howling about and contrasting of Communists and neo-Nazis, Stalinists and monarchists, priests and Cossacks that consumers of news in the West were treated to twenty years ago. Though reports pointed out the rallies (exactly as in 1993) drew large numbers of leftists and nationalist, the focus was kept on the Yeltsin-liberals throughout, albeit overall they probably have the least pull and mobilizing capacity of the three protest camps. Also, rather than once again concentrate on the fact protesters oppose the government for different reason, reports pointed out opposition to Putin "brought together" people of different political options. To further improve the picture readers were reassured protests were "driven by members of the educated and urban middle class". This in contrast to 1993 "ragtag" demonstrations attended by "hooligans".

Nor is it necessary to travel back twenty years to demonstrate glaring insincerity of the Western media's new-found appreciation for Russian people power — revisiting last Saturday will do. Even as the large anti-Putin rally in downtown Moscow was being fawned over, the nature and the significance of a huge counter-rally taking place at a different Moscow location was being crudely distorted. Numerous reports brought up the "anti-Orange" counter-meeting at Moscow's Victory Park only to dismiss it as drawing "no more than 20,000 people" most of whom were allegedly state employees bused in for the occasion.

The contrast was clear; up to 120,000 "educated" and "urban" people on the one side, and a punny 20,000 drones deprived of agency, simply bused in as so many sacks of potatoes on the other. But actually it turns out that, while both demonstrations were well-attended, the one in Victory Park drew more people of the two and furthermore could boast a lively atmosphere unlike the kind you would expect to find at a choreographed rally of bused-in civil servants. This is easily explained when one realizes the latter demonstration was not a pro-Putin rally, but more precisely an anti-anti-Putin rally, promoted as being a rally for Russia, against chronically malcontent pro-Western Yeltsin-liberals.

It was then a fascinating and significant people power type event, as worthy of being honestly reported on as the anti-Putin rally. But obviously this can not be expected from the same media that defended Yeltsin as "Russia's best hope for democracy" even as he staged the most serious assault on Russian democracy since the Bolsheviks had shut down the Constitutional Assembly, and editorialized away his violent suppression of citizen protest as Russia's president doing "what he had to do".
Posted by The Hero of Crappy Town