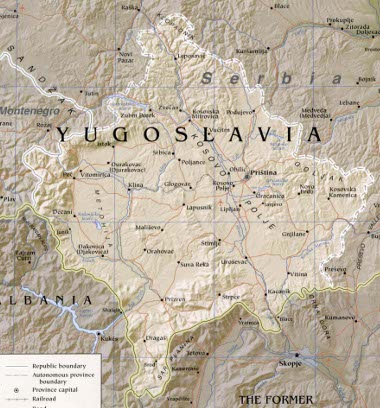 Serbia has never suggested its occupied province of Kosovo be partitioned between itself and an Albanian state. Despite this there has been, for years now, a stream of messages rejecting, warning against and condemning phantom aspirations for such a partition coming from officials and think-thanks in the West. This tiresome raising of alarm against partition seems nothing so much as an affected self-delusion aimed at creating the impression that structure of international law and treaty obligations that provide such an overpowering arguments for Serbia's position actually stand in her way.

Western officialdom wishes partition was the Serbian position, because were that the case it would have an overpowering counter-argument against it (that is now held by Serbia). For this reason it is inclined to pretend this is the "real" Serbian position hiding under a mask of protestations to the contrary. Once again the Empire's reality is not that which is real, but that which would best suit the Empire reality to be.

Additional reason for the affected self-delusion may be an attempt to goad Belgrade into coming out in favor of partition. By pretending the prospect of Serbia striving for partition is something it makes it uneasy it may be hoping the Serbs may come around to seeing it as an effective strategy to accomplish at least limited goals in Kosovo themselves. In reality for Serbia to drop the argument for the Kosovo as a whole would play into the hands of the Empire and make its intent not to return any part of Kosovo to Serbia's control far easier.

In addition to representing a foolish strategy to try to accomplish anything with, a push for partition of Kosovo by Serbia would mean colluding with the enemy toward an end that would see the rights of the great majority of those people from Kosovo who Serbia can claim to speak for be violated.

What is usually meant by the prospect of partition of Kosovo is a scenario where the four solidly-Serb northern Kosovo municipalities remain a part of Serbia while the rest of Kosovo is assigned to an Albanian state. Seeing the Serbs who remain in Kosovo form only a small portion of its population – the great majority being Albanians who do not see Republic of Serbia as their state – a partition that leaves a small part of the region in Serbia and rips away the rest would seem to have a crude kind of "democratic" fairness about it.

On closer inspection, however, this is not actually the case. Such demarcation would effectively grant self-determination to virtually all in Kosovo who can be readily assumed to want to live under an Albanian state, but would deny the same right to the majority of people of Kosovo who want Serbia as their state instead.

Not counting thousands of Serbs who left Kosovo before 1999 but retained some property in the province that was passed down to them, there may be up to 300,000 people of Kosovo who look to Republic of Serbia for their defense that she is required by laws it has itself enacted to provide and that ostensibly justifies its existence.

These include the 60,000 Serbs in the north of Kosovo, another 70,000 Serbs who remain in Kosovo south of the Ibar river, majority of Kosovo's Gorani and Roma minority populations, as well as some 200,000 non-Albanians expelled from the province after the withdrawal of Serbian forces in 1999 (a small number of which has since returned so there is some small overlap with other categories here mentioned). For all of these it can be reasonably assumed that they do not want their property under the power of an Albanian state. Partition in the parameters it is usually conceived in, however, entails just that for all but the 60,000 Serbs in the north.

There are only two ways for Serbia to fight for the right of self-determination of majority of Kosovo land owners who continue to see themselves as her citizens. One, by insisting, as it has, on the inviolability of borders of sovereign subjects of international law in Europe which means that the whole of Kosovo remains lawfully a part of Serbia. Or two, by insisting on the absolute right of self-determination right down to the individual land owner.

Both approaches have in common the rejection of any demarcation drawn up by foreign occupiers after 1999. Both base itself off the borders that existed before Serbia provisionally relinquished administration of Kosovo to the UN. The demarcation between sovereign states that places the whole of Kosovo in Serbia, and the division of land in Kosovo between private owners.

Adopting the second approach of arguing for self-determination right down to the level of an individual property owner would not be a wise thing to do strategically. The principle, albeit intuitively just, is not actually a part of body of law recognized by any state. As such it would be easy for the Western military occupiers of Kosovo to shrug off.

The two approaches are not mutually exclusive, however. Serbia could maintain the claim to the whole of Kosovo based on international law, while simultaneously promising that once its control is reasserted it would, gracefully and unlike any other state in its position, momentarily permit any legitimate land owners in the territory of Kosovo who want their property subject to an Albanian state to break off.

This is the only form of "partition" that can be proposed by a government in Serbia and not break the forced pact that allegedly justifies the existence of Republic of Serbia – deference to state authority in return for defense of basic freedoms against other states. Serbia working for partition of Kosovo under any other parameters but these would be state-treason against its citizens.
Posted by The Hero of Crappy Town