Croatia Did Not Vote Sunday 43.5% of eligible voters turned out for the EU membership referendum in Croatia. 66% of these voted in favor of membership. Politicians breathed a sigh of relief; the danger the referendum would fall loomed large in their mind, but this outcome did not materialize Sunday. Since November 2010, when popular opposition to EU membership briefly overtook support, there was great uneasiness among the Europeanist power elite, that was evident from the over the top and sometimes panicked way in which they conducted their pro-membership campaign.

For one thing Sunday there was no campaign silence otherwise customary for polls in Croatia, enabling the government to continue to advertise for membership into the very day of the vote and make the most of the far greater visibility of its publicly funded pro-EU campaign, compared to that of the underfunded, but spirited, grass roots anti-EU effort (operating under condition of television lockout). In an even more controversial development, a few days earlier the Minister of External and European Affairs (apparently "European affairs" are not external) warned retirees that unless Croatia joined the EU they would not receive their pensions:


"I do not want to be overly cruel, but if we do not enter the EU you will not receive your pension! I can be repugnant to you, but do not let your life to be repugnant to you. That is what it is about! We are in dire straits! Vote for the future of this country!"*


The result of the referendum indicates the aggressiveness of pro-membership campaign paid off. But how did it arrive at its success and who did it achieve victory over? The key is that as the political class demonstrated its determination to stoop to whatever depths necessary to see the absorption into the EU would not be thwarted, the voters correctly figured membership was a foregone conclusion they could do little to affect in the end. Subsequently, those undecided did not bother to look into the matter at all, and numerous opponents, as well as many supporters, did not bother to visit the poll and cast a vote according to their conviction.

The abysmally low turnout of only 43.5%  indicates that government pro-EU efforts did not so much convince the many opponents of EU status to come around, as it had the effect of deterring them from taking part in the vote. In the end 56.5% of the electorate stayed at home, 14.5% came out to express their disagreement with membership, 29% their agreement. The government's pro-EU effort then was not so much carried out in the context of competition between supporters and opponents of membership, as it represented a war of the power elites against any notion of people power — a struggle the latter lost handily. This, however, represents a defeat for opponents as well as supporters of joining the EU, provided they care for prospect of real democratic decision making at all.


*The statement was given in the context of hysterical scaremongering of how voting against EU membership would mean Croatia would "lose" its credit rating "inside the week [of the vote]", which would have the effect of raising interest rates and sending the economy on a catastrophic downward spiral. It is interesting the first thought of the Minister if the country ran out of funds was for retirees who would be left without pensions rather than say, ministers who would be left without their salaries. One almost supposes the Minister assumed the funds to pay the latter would always be found, no matter how low the credit rating. It is also interesting how the politicians saddling the country with debt becomes an argument to be even more sure to let them have their way. Surely if one's main concern is the debt crisis it is only sensible to attempt to frustrate the plans of the buffoons responsible for it instead?
Posted by The Hero of Crappy Town 3 comments 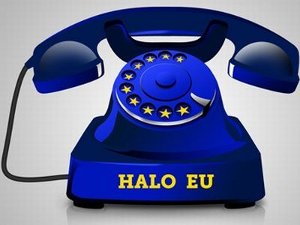 Croatia is not, and will not be a member of the European Union until at least July 2013, but that has not stopped it from adopting the worst practices of the EU already. Next Sunday its citizens will vote whether to join the EU, and do so under the understanding that should they pick the wrong option, they will have to vote again.

The referendum scheduled for 22nd January is allegedly binding, meaning that should it pass the national assembly will be obligated to ratify the EU accession treaty. Should the referendum fall, however, the Minister of External and European Affairs has explained it will just be repeated six months, or one year later. A Yes vote then is binding, but seeing July 2013 is still far away, a No vote this Sunday may not even postpone the accession.

Naturally this is having a demoralizing effect on the opponents of Croatia joining the EU, which makes it all the more certain the referendum will pass at the first time of asking. Indeed, opinion polls indicate those who are opposed to EU membership are considerably less likely to turn out than those in favor. With the widespread understanding the government will make sure the country joins one way or the other, many opponents will not bother to engage in a symbolic, but futile act of registering their opposition.

Another factor which is skewing the field is that the campaign against the EU is wholly reliant on voluntary donations to the cause, but the government pro-EU campaign can spend money from the state budget. The latter has therefore been appropriately lavish, mailing a slick propaganda brochure to every private home in the country, setting up a propaganda telephone call center and buying up add space on 17 local television and 80 radio stations (which is to say the majority of TV and radio stations in this country of 4 million people). As large as it is the significance of the immediate pre-referendum campaign, however, pales in comparison to the significance of the sustained pro-EU campaign of the last 15 years on the national public television, which at one point stooped to such depths as to broadcast a series of EU-themed propaganda shows aimed at children (produced in cooperation with the European Commission).