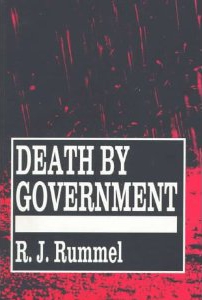 RJ Rummel is a political scientist best known for his contribution to the "democratic peace theory". He is also the author of the book Death by Government where he claims that states in the 20th century were responsible for killing around 174 million people. Interestingly this figure is frequently quoted by libertarians who are dismissive of the rest of his output; his "democratic peace" and his advocacy of aggressive foreign policy. It can be quickly shown his work on "calculating" the number of victims of governments calls for the same treatment.

We can ignore the fact his "most probable estimate" of deaths the responsibility of the Soviet Union presupposes 40 million deaths in the gulag, which happens to be twice the number of people who passed through the camps. We can also ignore his "high estimate" of the number of people killed by the USSR presupposes the murder of a fantastic 115 million Soviet citizens — a number of deaths sufficient to demographically break a far more populous nation than the Soviet Union (148 million people in 1926). Ignore also his having "calculated" that Soviet Union extinguished 2.38 million lives in the gulag between 1961 and 1982, and an additional 200,000 lives between 1983 and 1987. Ignore, because there is an even better way to showcase the level of his scholarship than debunking any of these. Better because it is made by Rummel himself.

In Death by Government Rummel claimed 174 million killed by government, but has since revised the figure to 262 million. This is partly the outcome of his changing his estimate of the number of people killed by colonial regimes from 870,000 to 50,870,000! Rummel explains this revision became necessary when, having read a book on Belgian colonialism in Congo, he realized he had been ignorant of a huge state-caused loss of life in that African territory. That seems like an honest explanation, but should he really be left of the hook this easily?

To begin with, the enormous loss of life in colonial Congo is hardly new (or obscure) information that was not available before. Rummel himself gives examples of sources (including Encyclopedia Britannica) that speak about it and were published well before Death by Government:
Also, it is not the case Rummel found 50 million victims he was not previously aware of in Congo. No, it is the case that having read a book on one specific colonial experience he became aware of the level of atrocity colonialism rested on and so he now figures the number of victims in Congo and elsewhere could add up to something like 50,870,000. This means he could have easily picked up a study on any number of brutal colonial regimes besides the one in Belgian Congo and it could have had the same effect of convincing him his figure of deaths caused by Western colonialism was off.

In other words, Rummel admits that at the time of writing Death by Government he was ignorant of the true nature of colonialism, but in a manner of a dilettante gave the 870,000 figure anyway. Professor Rummel can be commended that having learned something new he admitted to his delusion and revised his claim. However, if an author is going to make errors of this magnitude he probably should not be merely "reevaluating" estimates, he should be reevaluating whether he has any business writing books on the topic.
Posted by The Hero of Crappy Town 19 comments 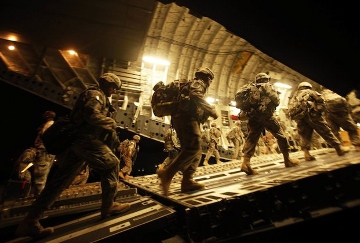 American withdrawal from Iraq is proceeding on schedule and it seems likely that come December 31st US military will have completed its retreat from that tortured country giving us the closest thing to the end of American war in Iraq that, in an age of never ending wars, we were ever likely to get. This being the case it would be a good time to examine if United States is coming home victorious having achieved its war goals, or defeated having failed to meet them.

It is no easy thing to determine what the war aims of the United States in the Iraq War were. In large part this is because United States leadership itself did not have a clear picture of what the purpose of the war they were launching was. What time the Bush administration devoted to envisioning a post-invasion Iraq consisted mainly of daydreaming with little concrete planning to go with. Nonetheless, it is possible to glean the gist of their vision from the rhetoric of the time and their conduct immediately after the invasion, when they still believed they would have everything they had fantasized about.

Post-invasion Iraq, home to permanent US military bases housing thousands of American troops, would serve as an American military outpost in the world's richest oil region. But more than that Iraq would end up a grateful, exemplary, pro-American democracy in the heart of the Arab World able to inspire millions toiling under tyranny to cry out for similar American benevolence.

To make sure this actually happened the United States would put off turning over Iraq to the Iraqis essentially for as long as possible — presumably a very long time. This would work, because somehow the same Iraqis who could not be trusted to be USA-adoring enough to erect a pro-American democracy right away, could nonetheless be counted on to be sufficiently grateful, or awestruck, they would not put forth meaningful pressure for the handover of power for a very long time.

In other words, behind the stated goal of "spreading democracy", USA was actually getting ready to apply in Iraq a variant of the recognizably colonialist model of "democratization" we know from Bosnia. A model under which a country is subject to foreign tutelage and governance by an unelected authority for the expressed purpose of making it ready for democracy, which however never seems to actually arrive.

Email ThisBlogThis!Share to TwitterShare to FacebookShare to Pinterest
Labels: America, Iraq, The Empire

That's right, not only is the Serbian public saddled with a president who will not take his marching orders from them, but will instead stuff down their throats whatever directives from abroad, they have to listen to him feel sorry for himself as he does it.