US Embassy: "Dodik as Croat Hero" 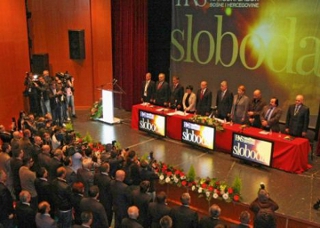 A section from a US Sarajevo embassy wire dated February 12th, 2010 published by Wikileaks states:


"Many Croats -- particularly the overwhelming majority who support a third entity, and including those who do not oppose Tihic as strongly as HDZ-BiH does -- have a great admiration for Dodik, some even regarding him as a 'hero,' because of his defiance of the international community and his disdain for the 'imposition' of the BiH state. Many Croats wish their own leaders would be as outspoken and carry as much bravado as Dodik. The Croats also appreciate Dodik's public expressions of support for a third entity, despite his insistence that the territory for such an entity come exclusively from the Federation."

The passage is instructive because it shows US sponsorship of "multi-ethnic" SDP, right up to using OHR to neuter Central Election Commission that had rightfully ruled SDP's entity government extralegal, is built around something the Empire knows perfectly well is a lie. US officials are perfectly aware their favorite political party in Bosnia can not speak for Croats of Bosnia and Herzegovina.

As the wire states, Bosnian-Herzegovinan Croats overwhelmingly support a third entity, a policy goal of HDZ BiH, which is the exact opposite of a unitary BiH — the policy goal of SDP. If Croats have an objection against their political leaders it is that they are too timid to stand against the foreigners pushing for centralization as boldly as Dodik does.

Foreigners stood behind the coalition gathered by SDP as it filled the nationality quota that sets aside government posts for Croats with its appointees, feigning bewilderment when HDZ BiH insisted SDP and the parties around it can not possibly represent Bosnian-Herzegovian Croats, who after all, overwhelmingly did not vote for them. The bit in this cable shows it is not the case Americans do not know they are supporting effective disenfranchisement of Dodik-appreciating Croats, they do — that's the point.
Posted by The Hero of Crappy Town 3 comments

Erhard after Erhard, Pinocchio after Pinocchio

Though it has been unmasked as infirm and impotent NATO Kosovo Force continues to maintain a nasty, repugnant facade. Just as its predecessors who had developed the Nazi counter-insurgency doctrine of Bandenbekämpfung, KFOR continues to maintain it is being paired against criminal gangs. It continues to threaten to use force to achieve its goals albeit it is plain it is not capable of doing so. It claims it is reluctant to use force because of its concern for civilians, but is in fact reluctant because of its concerned for itself.

Generalmajor Erhard Drews, who recently replaced generalissimo Erhard Bühler as the commander of the occupying forces, has stated at a press conference yesterday that the Jarinje incident of September 27th when American and German troops opened fire on unarmed protesters, wounding six of them, was the fault of "criminal groups from the north of Kosovo". Drews added the Serb counter-blockade of KFOR control points does not count as peaceful protest and is unlawful.

Attempts of KFOR to scapegoat some mythical, ever-present criminal bands for its violence and repression in the north of Kosovo are perfectly see-through seeing the pronouncements KFOR has made about the nature of the barricades. If the roadblocks put up by the blockaded communities are outside the law then anyone defying KFOR by standing vigil at them is a criminal regardless of what he, or she, does for a living. A less repulsive occupier would drop the pretense it believes Serb communities of northern Kosovo to be animated by some unseen "criminal structures" and just go with the part of the story where anyone engaging in an act of resistance is an outlaw by the virtue of not lying down.

We Could Win if We Wanted To

Drews engaged in further dishonesty when he implied KFOR could resolve the stand off in its favor by using force, if only it chose to do so. He threatened that KFOR "retains the right" to remove the barricades at any moment it deems appropriate and added the present situation "which pushes KFOR troops into small pockets around the crossings" could not be tolerated for long. He boasted that KFOR could "remove all the barricades in the north at any moment" and was already training to do so.

It is true the occupiers could remove the barricades, which are after after all manned by unarmed people. To overpower them should present only a trivial problem for a heavily armed occupying army. The self-confidence on display is a false one nonetheless. The technical challenge of removing the existing barricades is not the same as the challenge of ending the counter-blockade. Should NATO take over the existing blockades, it is a trivial matter for the Serb communities to erect new ones and reinstate the counter-blockade. The problem for KFOR is not how to remove the barricades, but how to break the will of the blockaded communities to resist.

Innocents are our Concern

Finally, Drews stated the reason KFOR is reluctant to move against the barricades is that it "would face the danger of injuring someone, of hurting innocent people". I suspect that Drews' predecessor, generalissimo Bühler, was rather more honest when he put the reasons for not escalating further as:


"I had the option to enforce and open up the roadblock. I decided not to do it because in the meantime so many criminals and extremists and armed people are here. It would be a nightmare."

The Serbs of the north of Kosovo have matched any escalation by the occupying forces with renewed determination and enterprise from their side, making it perfectly clear they are not going to back down whether they are being blockaded, threatened, or shot at. What is more, they did so while displaying remarkable moderation in opting for non-violent methods of resistance. Should the noose around them continue to tighten indefinitely, however, then at one point they will have nothing left to lose by adding armed resistance to their repertoire — lord knows they have the means to do so.

Rather than NATO's concern for innocents, whom it has anyhow already placed outside the law declaring barricades illegal and non-peaceful, it is the fact that it is dealing with communities that are not totally defenseless that has so far kept KFOR at bay.
Posted by The Hero of Crappy Town 0 comments

BiH: Finally Good at Something


Bosnia and Herzegovina just went one year without a government at state level. What is more, prospects the government will be formed any time soon are dim.

Agreement between the parties that won the election proved impossible on a number of specific, technical issues. The essence of the deadlock, however, is that there is no government because aggressive politics pursued jointly by the OHR and the main Muslim parties alienated the main parties of the Croats and of the Serbs from Sarajevo. Fed up, they are sending a message of no business as usual. Either the SDS and SDA and their international sponsors adjust course, or they will in Serb and Croat parties have a collocutor difficult enough to ensure that there will be no government — a situation with which their constituents are perfectly happy since they have no stake in the state in the first place, but are always happy to point out its dysfunction.

It seems likely they will remain happy for a while longer. Though the central state going without a valid cabinet of ministers should be a cause of concern for super-centralizers like the SDS and SDA this does not seem to be the case in BiH. Probably calculating a crisis makes increased foreign involvement likelier the Muslim parties have not budged an inch.

Politicians always have an incentive to cooperate, so there is an ever present danger political parties involved will leave principles aside and rush into each others' arms, but until that happens Bosnians and Herzegovians will continue to enjoy an existence plagued by one cabinet of ministers less and BiH will remain hot on the heels of Belgium, the reigning world champion of political deadlock and not having a government.
Posted by The Hero of Crappy Town 0 comments