Government Only Good for Surrendering 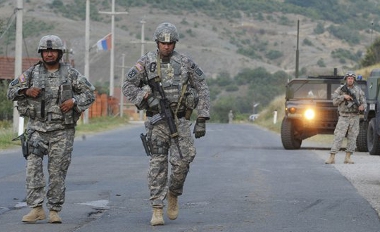 After they first objected to the Serbia-KFOR agreement that sanctifies a NATO-enforced economic quarantine of the north of Kosovo, the representatives of the affected communities met Tuesday to decide on whether to dismantle their roadblocks as called for by Belgrade anyway. They left without reaching a unified position. Since then, however, most of the roadblocks have gone down. Only one of them remains.

Defending the agreement Serbian government negotiators admitted the deal was "not ideal", which is putting it mildly, but insisted it was "the best [deal] possible under the circumstances". That is very much true, the circumstances being the negotiations for the Serbian side were conducted by a government that has long been looking to surrender Kosovo, albeit careful to do it in a way that would not cause its immediate and dramatic downfall from power.

The aspect of the deal that the Serbian government has been flaunting as its biggest positive is that NATO promises not to use force to unilaterally change the circumstances on the ground. No one in their right mind can take NATO seriously on this point, however, when the situation in force now is precisely the outcome of one-sided NATO action, and when Belgrade just signed under it.

The communities in the north of Kosovo elect their municipal officials under Serbian law and election schedule. It would be very difficult for these municipalities to ignore positions of the government of Serbia, when what they are struggling for is to remain a part of the constitutional order of Republic of Serbia. The government in Belgrade is not loathe to take advantage of this predicament of theirs.

The Serbs in the north of Kosovo were told that should they not abide by the Serbia-KFOR agreement official Belgrade would hang them out to dry. That would indeed put them in a tough spot, but it is hard to see that the present arrangement where the marionette government in Belgrade will sign under capitulations in their name is any better.
Posted by The Hero of Crappy Town 1 comments


In the course of the current tensions in the north of Kosovo the commander of NATO forces, a Bundeswehr officer Erhard Bühler, on multiple occasions claimed the people obstructing NATO were criminals or in the pay of criminals. Bühler ascribes every aspect of local response to NATO enforced stranglehold of the north to "criminal structures" which allegedly run the whole north of Kosovo. He goes so far as to claim the people assembling at roadblocks had been paid by criminals to do so.

The German NATO general claims there are no problems in Kosovo of a political nature, troubles only arise from dissatisfaction of criminals. In other words, the Serbs have no valid reason to object to politics enforced by NATO, the only people who could object are criminals, so anybody who objects must be a criminal or in the service of criminals.

Bühler's propaganda points are as predictable as they are idiotic. Attempting to criminalize resistance to occupation has been long domain of powerful states and militaries. In the German case it begun with hysteria surrounding francs-tireurs in the Franco-Prussian War, then intensified through every subsequent conflict until it, in 1942, culminated in the formalized security doctrine of Bandenbekämpfung.

There exists a perception Germany laden with a Nazi past is now more pacifistic than other comparable powers. It is a view that can not but bemuse the northern Kosovo Serbs in the sights of a belligerent German general who is resurrecting the talking points of Bandenbekämpfung in relation to unarmed people staging sit-ins.
Posted by The Hero of Crappy Town 0 comments

Tightening the Noose – With Belgrade's Blessing 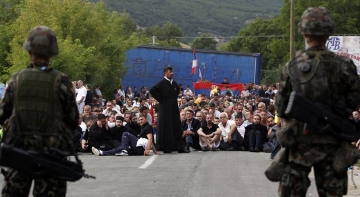 When last month the KLA-staffed government in Priština attempted a takeover of the Jarinje and Brnjak border posts between Kosovo and unoccupied Serbia it showed itself incapable of doing so. The reaction of the local population forced its speedy withdrawal. Instead NATO took over the crossings in its place and enforced a blockade on the Serb enclave in the north of Kosovo for it. This week official Belgrade attempted to grant the blockade its official blessing.

When the crisis first broke out Serbia dispatched negotiators to demand a return to the state of affairs as it existed before the attempted Albanian takeover. This would mean a withdrawal of American and French NATO troops occupying the border posts and an end to their barring Serbian goods from crossing the administrative border. Instead, the government's negotiators signed under every aspect of the state of affairs currently in place – except under the roadblocks set up by the local Serbs.

The settlement the Serbian government had agreed to would have the NATO blockade of the north continue. Exactly as it is the case at the moment only people would be permitted to cross the administrative border, but not goods. The only way in which the deal would perhaps improve the existent situation is that NATO would promise to let pass humanitarian aid shipments. As a precondition to the agreement becoming valid the makeshift roadblocks impeding NATO access to the border posts would have to be dismantled.

In summary, the Serbs in the north of Kosovo – who are facing a shortage of provisions and medical supplies – were called upon by their government to abandon their most effective avenue of resistance and protest so that in return a NATO enforced economic stranglehold on their enclave may be formalized and they be reduced to dependence on shipments of humanitarian aid.

Needless to say the roadblocks remain in place. The people who would be affected by the blockade rejected the deal the marionette government made in their name and ostensibly for their benefit. One thing the independent-minded Serbian community in the north of Kosovo can teach us is that the best hope for dignity lies in breaking away, not from your country, but from your government.
Posted by The Hero of Crappy Town 0 comments