The only true value of the current Serbian government is pathological deference to Imperial power exercised under the guise of extreme pragmatism, defeatist fatalism and supposed aversion to conflict. Appropriately, it has long been expected the government in Belgrade will act as an agent of Empire in Serbia. Wednesday, however, the government went even beyond that.

Monday evening the Kosovo Albanian government in Priština moved its paramilitary police to occupy the two crossings on the border between occupied Kosovo and the rest of Serbia in the solidly Serb populated north of the province. This was done days after the KLA-staffed government in Priština declared goods from unoccupied Serbia would no longer be allowed in Kosovo. The ban on imports coupled with control of borders by the government in Priština would enforce a stranglehold on the Serbs in the north, with a view to subdue them, or force them out.

When this happened the first reaction of the Serbian authorities was to categorically rule out coming to the aid of the imperiled Serbs in the north of Kosovo. (They were more concerned to prevent any rallies in their support from being staged in Belgrade.) The people there, however, have long learned not to look to the government, but to rely on themselves. Within hours they had the roads leading to the crossings blocked by setting up makeshift roadblocks and standing vigil, thus blockading the Kosovo Albanian police at the border posts.

NATO first claimed the action of the government in Priština had not been coordinated with it, then quickly saw to it that it was. When the Serb response forced the evacuation of the paramilitary police, NATO decided to ferry in regular police from Priština to take their place. Reacting to this turn of events, Wednesday local Serb youths chased away police from one of the border posts and set fire to it.

On this occasion, however, the Serbian government found uncharacteristic courage to issue a strongly worded attack — against the Serbs! President Tadić labeled the young adults who had demolished the border post "hooligans" and other government officials took to denouncing them as "extremists". (International media followed suit styling them "hard-line Serbian nationalist".)

A Choice of Scenery 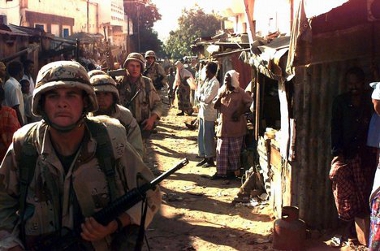 With famine affecting parts of Somalia, Jeremy Sapienza at antiwar.blog takes time to remind us this is not happening in a vacuum. It is taking place in the context of disruption caused by foreign military activity.

Ethiopia continues to interfere militarily in the border areas of Somalia even after its end of occupation of southern Somalia in 2009. 9,000 African Union troops financed by the United States contest the control of Mogadishu leading to endless battles. Meanwhile direct US involvement consists of regular cruise missile and drone attacks, with secret CIA prisons to go. Additionally Washington will finance any warlord willing to throw his lot with the internationals' clients in the 'Transitional Federal Government'.

This is not the first time there has been a correlation between famine and foreign intervention in Somalia. Twenty years ago an intervention was not one of the causes of malnutrition, but the other way around — famine conditions brought on foreign military adventurism.

On that occasion Americans ended up battling a warlord Mohamed Aideed whom they had initially partnered. Numerous Somalis, combatants and non-combatants alike were killed at the hands of foreign soldiers. Finally, after a media embarrassment in the Black Hawk Down incident Americans hastily withdrew. It was a defeat of American overseas adventurism as clear cut as the fiasco in Lebanon a decade earlier.

The background to what led the United States on this path of failure is an instructive one and comes with an unlikely Balkan connection. The 1992 famine in Somalia provided the backdrop to the intervention, but the desire to provide famine relief fails as a credible cause of intervention. Humanitarian crisis in Somalia was not the only one in Africa at the time and was not necessarily the most severe of them. Additionally 'Operation Restore Hope' was launched only once the worst of the famine was already over and the lot of Somalis was beginning to improve on its own. 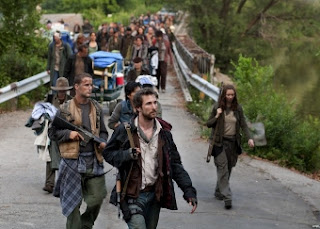 At a time when the United States is maintaining two objectionable occupations in Iraq and Afghanistan, American TV viewers are watching shows that place Americans in situations not unlike those of occupied Iraqis and Afghans.

The US is occupying two countries with a combined population of 60 million people and battling multiple resistance movements in each. Additionally, no less than six different countries (Libya, Somalia, Yemen, Iraq, Afghanistan, Pakistan) are being sprinkled, or showered, with US bombs and cruise missiles.

Despite that, there are not many works of cinema or television being made that would have Americans or American-like people invade and occupy places, terrorize them from the air or burst into homes at night to drag away fathers and sons. Presumably proof enough that Americans would not find shows like that enjoyable.

The kind of shows American TV viewing public does like have Americans or American-like people standing up against outside aggressors wrecking their lives and homes to wage desperate, but determined and righteous battles of survival and freedom.

The premise of the series Falling Skies, early in its run on TV in America is that there has been a successful alien invasion of Earth. The viewer has the opportunity to follow partisans of the '2nd Massachusetts Regiment' as they try to survive, protect civilians in their midst and fight the alien occupation. 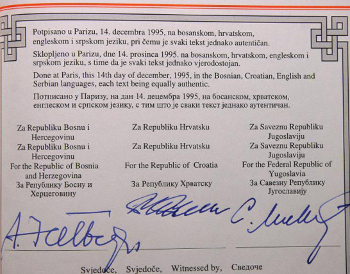 I figured saying a thing or two on books I read could be another way to liven up the going on here. The first one is going to be Bosnia: Faking Democracy After Dayton by David Chandler which is the last book I read. Not a review, but a summary key things I got out of it and would be useful to remember.

The work is based on author's observation of the first three years (1996-98) of international involvement in Bosnia and Herzegovina.

Every single peace plan put forth before the local belligerents in the conflict in Bosnia and Herzegovina envisaged a role for foreigners in Bosnia and Herzegovina that was incompatible with a fully sovereign and independent state. This was the case even with the very first settlement proposal, which predated the beginning of the war. So at the same time Europeans were giving encouragement to Alija Izetbegović to take BiH out of Yugoslavia and have "independence" they were already seeing themselves as managers of the place. Every subsequent peace plan tended to go further in granting foreigners power over the country.

After the war internationals gradually intensified their grip on Bosnia. The Dayton Agreement, which ended the war, presupposed only a short, one year period of supervision by the internationals in anticipation of the first post-war elections. These were held and observed to be free and fair. Instead of getting out the internationals unilaterally extended their mission for another two years and expanded their powers of regulation in the sphere of economics. The next year they declared their mission was now an indefinite one and their 'High Representative' could exercise absolutist powers.

Chandler explains this was done under the guise of 'democratization', which, other than its etymology, has nothing to do with democracy. The process of 'democratization' took Bosnia and Herzegovina further away from being a democracy as it piled on powers for the unelected colonial officer, the 'High Representative' and subordinated him the actual, elected, representatives.

The language of democratization, it is explained, makes it possible for outside involvement in BiH to appear as idealistic just as it sets up a platform for self-flattery and denigration of Bosnians as less-civilized on the account of their ‘ethnic rivalries'. Unsurprisingly since 'democratization' represents the resurrection of Civilizing Mission style colonialism wrapped in the language of human rights and ethics based foreign policy. 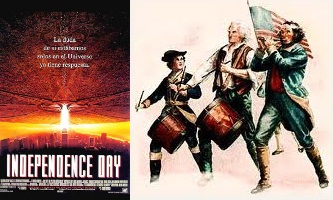 It passed by me without notice, but actually two days ago was the 15th anniversary of when we repelled an alien invasion! Good days!

It turns out this date is not just a World holiday, but also a local holiday in the country of United States of America where it marks a beginning of an event called the American Revolution from way back, like even before ABBA.

An interesting essay on this event - Independence Day Propaganda by Anthony Gregory. It tries to highlight some of its less advertised aspects. These include:

The piece goes well with the podcast John A. Nagy - Rebellion in the Ranks: Mutinies of the American Revolution (from NYMAS website) which also highlights a side of the conflict that is seldom considered. There is also a video interview with Nagy, but it's done in a boring fashion, so I can't honestly recommend it.

Posted by The Hero of Crappy Town 1 comments

And jet they can not go without a mention in the Western press for long. Major news outlets will periodically take time off from reporting on blondes missing in the Bahamas to say things about schools in Bosnia. What about them?

They are segregated abominations, that's what! *Shivers!*

The most recent of such pieces, NYT's Bosniaks and Croats, Divided in Class and at Play starts of with:


"Every morning at the local grade school formerly known as Brotherhood and Unity, the Catholic Croat children head to the right, and the Bosnian Muslims head to the left."

"The Croats study in the school’s cheerful looking main building, which was recently renovated. The Muslims attend class in the crumbling, dingy annex next door."

Why if this isn't Birmingham, 1963 all over again!

Advancing through the article further we get more of what poses as a measure of the place. The school is on the front lines of ethnic divisions and kids get into fights. These people are hateful little bastards, those Croat types especially. They have a local war criminal guy who was convicted in Holland. And they renovated a hotel, and it has spacious hallways.


Nine months after elections in Bosnia and Herzegovina stil no government at the level of the central state. Doris Pack can say what she wants but these Balkanites seem to think anything Belgians can pull off, so can they. Fingers crossed they can build on this to make it a full year.
Posted by The Hero of Crappy Town 0 comments