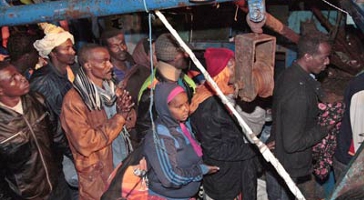 In relation to the war in Libya we are predictably faced with overwhelming evidence intervention has nothing to do with humanitarian inclinations. The bombing has not improved the humanitarian situation, but made it worse (duh). This on its own could theoretically be put down to incompetence and stupidity rather than a lack of noble intentions. The attitude of intervening states to the humanitarian disaster they magnified, however, gives lie to their claim that attempting to mitigate suffering was why they became involved.

The bombing campaign conducted under the pretense of a "no-fly zone" added to the number of people fleeing just as it put an end to the airlift evacuation making it more difficult for refugees to get to safety. Probably many that would have otherwise not fled or would extricate themselves by air were condemned to desperate alternatives like braving the Mediterranean on overcrowded vessels or crossing the Sahara. The result has been that of people dying from drinking contaminated water or drowning as they try to get away. Associated Press estimated the number of refugee deaths could be in the thousands:


"They are the latest among hundreds, probably thousands, who have died in desperate attempts to get away from the fighting — and escape charges that they were fighting for Gadhafi as foreign mercenaries."

The intervening states are humanitarian enough to rain down bombs, killing children and wrecking schools, but not humanitarian enough to receive the refugees fleeing the fighting and their anti-Gaddafi allies with open arms. The refugees who make it to Italy are being accommodated only begrudgingly and within set quotas. UK, one of the most aggressive when it came to expanding the business of killing people, refuses to accept any at all. Denmark, all the while proudly flying air sorties over Libya, reinstituted border controls defunct since 2001 partially on the back of fears it would be affected by the refugee situation.

Meanwhile a boat carrying people of various African nationalities fleeing Libya was left floating dead in the water for 16 days without any of the NATO vessels in the vicinity responding to its its calls for help. By the time it washed up on the shore most people on board had died from thirst. NATO literally would not give a glass of water to people dying in front of them.
Posted by The Hero of Crappy Town 0 comments

Email ThisBlogThis!Share to TwitterShare to FacebookShare to Pinterest
Labels: Libya, NATO, The Empire

Thank God for a Coincidence! 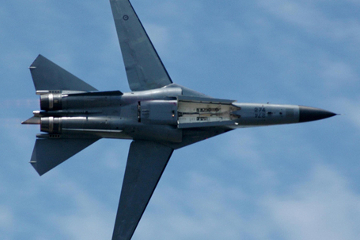 What do you know, just as Operation Unified Protector hit its low-point there came a morale booster. News that the ICC was after an arrest warrant for Gaddafi. This is pure coincidence of course.

The same type of coincidence that saw ICTY indict Radovan Karađić in July 1995 just as the groundwork for Operation Deliberate Force was being laid down or Slobodan Milošević in June 1999, in the midst of Operation Allied Force.

Somehow whenever NATO digs out some exotic savages to open fire on, international courts coincidentally take aim at the very same rascals.
Posted by The Hero of Crappy Town 0 comments 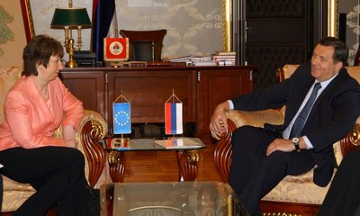 When Assembly of Republic of Srpska passed the law on Court of BiH referendum the "High Representative" Valentin Inzko turned into a veritable energizer bunny. He demanded the law be revoked, gave the Serb legislators a deadline upon which to do it, threatened sanctions, then hoped away to to tell UN Security Council tall tales about the "worst crisis since war" brought on by the Serbs.

The Serbs shrugged their shoulders, refusing to pay too much attention to him, but let it be known any sanctions applied by Inzko would receive an answer, not elaborating further. The local papers were certain the move in mind was withdrawal from all institutions of the central state, political representatives of the Serbs did not see it fit to contradict them.

Inzko returned from New York, the deadline on his ultimatum came and went and nothing happened. After talking up a storm Inzko did exactly nothing. Instead his boss, Catherine Ashton, EU foreign policy chief, flew in to BiH, sat down with Milorad Dodik and appeased the Serbs.

The Serbs have been promised the Court of BiH will have a proper look in to see to what degree their complaints are warranted, the work on this is to begin June. In return they will put the referendum on hold, pending the outcome of this process, just what Dodik had been offering since the very beginning.

Dodik's party had been talking up the issue of Court of BiH for 3-4 years to no avail. Persistent pointing out of its tyrannical aspects, the retroactive application of penal law, the hijacking of cases from entity courts, the regular and appeals judges being appointed by the same person, made no impression on Western colonials. But what years of playing nice could not do a direct challenge to their authority delivered in a month.

There is a lesson there. The way to deal with imperialists is by flexing muscles, it is what they understand best. Take Catherine Ashton. Just months ago she was busy devising an EU sanctions package to be used on the unruly natives. Fast forward one referendum law later and she is in BiH on urgent business, bypassing and undermining the bellicose "High Representative".

This situation is far from satisfactory, that the EU has any say what shape the courts in Bosnia and Herzegovina take is scandalous. Besides, the West has a very poor record of actually doing what it obliges itself to do. But the internationals being forced into making a concession to the Republic of Srpska is an encouraging first.
Posted by The Hero of Crappy Town 0 comments

Inzko: Bosnia, it is I


The BiH melodrama continues as Inzko keeps replaying his lines about a terrible, unprecedented crisis Bosnia and Herzegovina finds itself in, his words faithfully echoed by the Imperial media. His last stage performance took place at the UN Security Council. Russians rained on his parade, but the high profile of the stage provided him the largest echo chamber jet as every English speaking print outlet out there carried his statements.

The "High Representatives" are not exactly known for avoidance of the bombastic and it is no different this time. There was a real crisis in 1999 when the international occupation forcefully dismissed the democratically elected President of Republic of Srpska to clear the path for its protege and golden boy, one Milorad Dodik. There was a real crisis when in 2001 the internationals moved against banks and protesters with armored vehicles and decimated political leadership of the Bosnian-Herzegovian Croats with arbitrary arrests and dismissals.

There is the presence of Salafis, imported to Bosnia in 1990s by Americans, that is a source of intermittent terrorists attacks. Hell, there is a severe crisis now caused by the "High Representative" covering the back of an unlawfully constituted government of what is colloquially referred to as "the Muslim-Croat Federation" without the participation of Croats that anybody votes for.

The referendum law passed by the Assembly of Republic of Srpska on the other hand is emphatically not a crisis. What exactly is critical about a referendum whose outcome is not in the least bit in question? Yes, the Serbs of Bosnia and Herzegovina do not support centralization introduced after the signing of the Dayton Peace Treaty and not foreseen by it, most of it technically unlawful and all of it enacted under severe foreign pressure. Big freaking newsflash!

Now, it is another story if political leaders of the natives finally in some small measure asserting themselves against foreign diktat presents an enormous crisis for the High Representative and the internationalist gang. But the High Representative is not synonymous with Bosnia and Herzegovina, in fact the last time I checked he wasn't even a citizen. His problems are of no concern to the land whatsoever.

The sources of crises in Bosnia and Herzegovina in the last fifteen years have been alien elements, chiefly the Western colonials who easily do more harm than their Salafi bomb-planting friends. Standing up to them and throwing them on the defensive, as Dodik has done, is the best thing that can happen for stability of the country. With international tutors scrambling to oppose a challenge to their role, at the very least Bosnia and Herzegovina is gifted a temporary respite.
Posted by The Hero of Crappy Town 1 comments 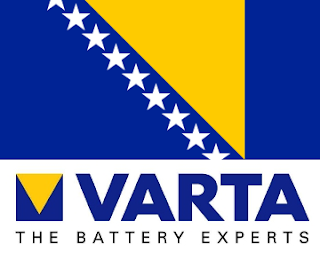 Western mainstream press is great for cheering yourself up. With its inclination to paint its adversaries as far more threatening and radical than they really are it frequently portrays a picture that is much more appealing than reality. Take the recent Guardian and Reuters news articles on BiH.

Apparently "Bosnian Serb separatists [are] holding a referendum" on national courts which represents only "the latest of a range of Serb separatist moves in Bosnia". The planned referendum is "a step towards Bosnia's breakup". The Bosnian Serb leader, Milorad Dodik, who "regularly taunts the international envoys" has already pledged "he would not back down". Thus the internationals are "heading for a showdown with Dodik" which is "likely to intensify Bosnia's dangerous drift and paralysis". Ha! Would that only half of that were true.

In reality Dodik has not mentioned secession in years. Even when he did, it was not in terms of his own policy goals, but in the context of what Bosnian-Herzegovian Serbs may be forced to do to should the transfer of powers from Republic of Srpska to the central state not stop. In the current stand-off too he has kept his goals limited and has offered the internationals a clear and easy way out. He will settle for renegotiating the way in which the central state courts operate and for partially reigning them in. This may represent the standing up against foreign overlords on the level that is rarely seen in former Yugoslavia anymore, but is nowhere near the exciting picture Western media paints.

Inzko, the "High Representative", comes off as panicky in the aforementioned reports, but is right on the money when he says:


"Never before has such a referendum been planned. The intention is to roll back all the achievements. It challenges the role of the high representative."

Certainly, the vote on the courts is being presented as a symbolic stand against all such centralizing legislation imposed from the outside. No wonder that Inzko is nervous and feeding the interviewers the "worst crisis since the end of the war" line. That is nonsense, the land is fine, but it is a crisis for the OHR.

On one hand we have an elected local politician already warned it is not out of the question he could be removed (it is a bluff). On the other a foreign appointee with dictatorial powers over land not his own. The motions of one side for a popular referendum (it does not get much more democratic than that), being answered by the other with threats of "sanctions similar to those placed on Robert Mugabe and Muammar Gaddafi."

It sucks to be an international. The moral high ground tends to be quite elusive in such circumstances. Naturally then a direct challenge like this one is unnerving.
Posted by The Hero of Crappy Town 0 comments