Schwarz-Schilling Credits Himself With Preventing a War 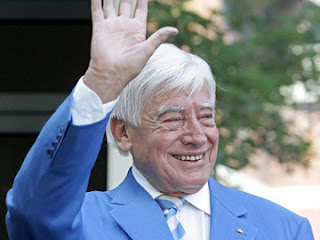 In 2006 and 2007 there was talk of finally closing the Office of the High Representative in Bosnia and Herzegovina. A German, Christian Schwarz-Schilling was to be fifth and last "High Representative". It did not happen, after the 5th there was the 6th and then the 7th "High Representative". To anyone familiar with either bureaucratic inertia or West European addiction to meddling in the Balkans this could not have come about as a surprise, regardless at the time the statements that OHR was coming to its end were unequivocal.

In a recent interview given to a Sarajevo daily Schwarz-Schilling reveals about the only thing he did in his year in the "Office" was to campaign for it to not close. He names Madeleine Albright and Richard Holbrooke as the two people who aided him in this crusade of his the most. He goes on to state that had he not been successful the consequences would have been "catastrophic". According to Schwarz-Schilling Republic of Srpska would have been independent by now and it would have been a question of what type of new conflict would arise given the reaction of Croats and Muslims.

Office of the High Representative has always been West European depository of distinctly second-rate bureaucrats and politicians. But even in this miserable bunch Schwarz-Schilling stood out as particularly worthless. Whereas his successor Miroslav Lajčak succeeded in using his tenure to help himself catapult into the position of foreign minister of Slovakia, the looser Schwarz-Schilling has to satisfy with a fantasy where his underwhelming keep-the-OHR-alive campaign averted a war.

There in a nutshell you have the reason why intervention in the Balkans made sense for the West. Aside from being an opportunity for individual advancement, it presented endless opportunity for self-congratulation. After the West collectively congratulated itself for ending non-existent death camps, a non-existent genocide and for just in general working on straightening out the savages in the Balkans and their mess, why wouldn't the dweeb Schwarz-Schilling congratulate himself for averting a non-existent danger of war in 2007?

As for the issue of the closure of the OHR, Schwarz-Schilling's victory was empty. The "High Representative" is far from the position of absolutist power it was in the days of Paddy Ashdown's and Wolfgang Petrisch's frenzied power trips. On paper the "High Representative" has all the powers it had in their day, but in reality is constrained from exercising many of them. The "office" continues to exist but is becoming less and less relevant.

Unfortunately the main reason why this is so is that Brussels, and more and more Berlin, are becoming involved in Bosnia and Herzegovina directly. This sort of tutorship is potentially even worse than the exercise of power through the so called High Representative since being more stealthy it can endure far longer.
Posted by The Hero of Crappy Town