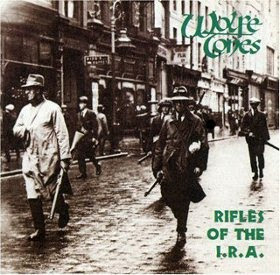 In the British-Irish conflict in Northern Ireland we have a semi-recent guerilla war where the guerrillas spoke English. This presents an opportunity to easily study guerrilla and eliminates many of the excuses for not understanding it. The studying does not even have to consist of heavy reading. Plenty can be gained by just listening to melodic three chords string music. I am proposing the idea that almost anyone can advance his understanding of determined guerrillas anywhere by examining Irish Rebel Music. It would be silly to claim to know what were the musical tastes of actual PIRA guerrillas, but it is safe to say the part of the populace that supported them, and therefore represented its recruitment pool, had a place for this kind of music.

A good approach to studying it might be to analyse its recurring themes. According to the themes the songs can be seemingly divided into half a dozen basic categories.


The windup song: Kinky Boots, Reverend Ian, Fenian Record Player
The celebration song: One Shot Paddy, The Helicopter Song, The Armagh Sniper
The defiance song: Tiocfaidh ar la, Fighting men of Crossmaghlen, The Decomission song, Go On Home British Soldiers
The grievance song: The Men Behind the Wire, Irish Republican Jail Song, Aidan Mcanaspie
The history song: Let the People Sing, The Wearing of the Green, Irish Soldier Laddie, Boys of the Old Brigade, Boys from County Cork
The martyr song: Shaun South of Garryowen, Ballad of Billy Reid, Hughes Lives On
Naturally there is overlap and a few songs defy such straightforward categorisation utterly, for example: Going Home at Last, My Little Armalite and Auf Wiedersehen to Crossmaghlen. Still it is possible to identify the largest overlap groups as:

The history/marty song: Kevin Barry, Erin Go Bragh
The history/defiance song: Broad Black Brimmer, You'll Never Beat the Irish, Ireland Unfree, Freedom's Sons, By the Rising of the Moon
The martyr/grievance song: Roll of Honour, The Ballad of Gerard Casey, Eddie Fulton, Ambush at Clonoe, Shoot to Kill, Men of '81, The Ambush at Drumnakilly, The Ballad of Bobby Sands, The Loughall Ambush
What can be reasonably deduced examining these categories?

It would probably be a mistake to over analyse the windup songs. They show humour endures in the worst of circumstances, but before that they are an attempt to sting the enemy, to get at him even if just with a song.

The notable thing about the celebration songs is that there are not many of them. Also they celebrate achievements which in the context of a war as a whole are not of any grand importance. If a guerrilla movement needs victories to sustain itself then it only needs minor victories of the sort which is impossible to deny to it.

The defiance songs set their mind on the final outcome, they convey the mind-set of people so hard hit they are willing to endure the security countermeasures. The songs themselves do not convey a different sort of message than your average Twisted Sister rock anthem, only here you come away with the feeling they mean it. It is certainly not an everyday type of sentiment, but one rather extraordinary.

The grievance song category is somewhat lacking in the Irish Rebel Music, perhaps on the account of the British not treating the Irish during the Troubles as badly as they could have, certainly not as bad as in the 1919-21 war. Mayhap they lacked material. Whichever way, where there is a grievance there is not a call for solidarity far behind.

An indication the best way to drive a population to support the guerrillas is by mistreating them.

The history songs appear to be less edgy and warlike. History is mined for that which can be held up as an example to follow, which in the Irish case are all the more compelling since their current and their historical opponent are one and the same, but there is nothing that would show collective memory is the actual cause of conflict or the immediate motivation of the fighters. They become potent only in crossover when an event is mined that is an example of defiance or martyrdom.

The thing most notable about the martyr song category, is that it exists at all. It is not a theme for other types of music, except in church music but not in this type of bleak, dead-end feel. There are no conventional hero songs. All the heroes are dead. But the dead are remembered, revered and live for ever ("Hughes Lives On"). The martyr songs are also one of the most drenched in emotion. Martyrs are an enormous boon to determination and recruitment. Who will allow the self-sacrifice of men of such calibre to have been for nought?

The important and correspondingly large is the overlap of the martyr/grievance themes. A reminder that every martyr is by necessity also a grievance. In normal time a people is not producing martyrs. If it is then that is a sign of something being wrong right there. On top of that if the populace identifies the guerrillas as "our young lads" or something along those lines then their deaths can amount to a grievance, even if they do not support their means or even their political goals. This support increases exponentially if there is a feeling "the lads" were killed by an enemy that is overly aggressive.

Consider the multitude of grievance/martyr songs about IRA men killed under the "shoot to kill" policy. Not giving an enemy soldier the chance to surrender is a crime, but much lesser than other crimes that happen in war. Jet the grievance is great. Because to the populace these are not clashes pitting faceless soldiers against other faceless soldiers. They amount to situations where local lads are being mercilessly gunned down by professional special forces types and dogs of war. There is no contradiction to a populace feeling itself oppressed between a fighter being simultaneously a "bold volunteer" of the "proud IRA", defying the whole might of the British Empire and being a 20 year old lad with no military training that does not deserve to be preyed upon in an ambush by one of world's better equipt and trained special operations units and then not given a chance to lay down his firearm before he is shot in the head. Not merely mistreating the populace, merely going after the combatants in an offensive operation can, and likely will be counter-productive.

So much for this type of analysis for what it's worth. The conventional way is to examine the specific things the lyrics tell us – if we chose to believe them:


They told me how Connolly was shot in his chair,
His wounds from the fighting all bloody and bare.
His fine body twisted, all battered and lame
They soon made me part of the patriot game.
It's nearly two years since I wandered away
With the local battalion of the bold IRA,
For I read of our heroes, and wanted the same
To play out my part in the patriot game.


I was stopped by a soldier, said he, You are a swine,
He beat me with his baton and he kicked me in the groin,
I bowed and I scraped, sure me manners were polite
But all the time I'm thinking of me little Armalite.


When I grow up and marry, I'll have a little son
I'll tell him about the regiment and the terrible things they've done
And when he gets older, becomes a man like me
He'll become a volunteer and set old Ireland free

How determined they are:

What time means to them:

What does it take to be a hero:

How they generally end:


While returning the guns Billy met British Huns
And when the fight had begun
His position was dire when his gun wouldn't fire
So he died with that old Thompson gun.

Allthough he lay dead he was kicked in the head,
By the hair they dragged him around.
But the still fear him yet and we can never forget,
How brave Billy Reid stood his ground.

Where they come from:


In their boyhood years these lads learned at first hand:
They were only second class in their own land,
Stopped and searched by police each time they walked the streets
And degraded by each foot-patrol they'd meet
To those RUC and soldiers it was fun,
To intimidate our children with their guns
But there's some young folk who won't take any more
And there's some who want to even up the score

What happens to them because of the occupier:

The fate in store for the occupier for it:


The British scum,
They do fear,
Never again they'll see their cursed shore.
Because they know
They'll pay dear,
And the RA will even Ireland's bloody score.

Of those not to be be forgoten:


In those dreary H-Block cages ten brave young Irishmen lay
Hungering for justice as their young lives ebbed away,
For their rights as Irish soldiers and to free their native land
They stood beside their leader - the gallant Bobby Sands.
Read the roll of honour for Ireland's bravest men
We must be united in memory of the ten,
England you're a monster, don't think that you have won
We will never be defeated while Ireland has such sons.

And of that not to be forgoten:


And cruel British assassins in the cover of dark,
Headed for Rasharkin, onto Shamrock Park,
With their guns of terror they burst down the door,
And the cowards went looking for for the family man of four,
The found him with his wife and baby girl in bed,
They sprayed English bullets and left Gerard Casey dead,
The cowards had fled - the sadness that night,
For his wife and young family would carry on the fight.

Once again black flags are hoisted in the county of Tyrone
Three more good men lie butchered by the forces of the crown
We shed tears of grief and anger as the news spreads quickly round
How the SAS had waited and without warning gunned them down.

On the road past Drumnakilly sorrow shrouds thae roadway still
There the Sas men lay in ambush to do Maggie Thatchers will
Like Loughall and like Gibralter British justice has no frills
They came to Tyrone for vengeance and their orders were to kill.