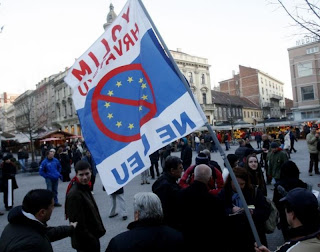 When the Arab World protests got into gear, probably in every country in the world there were people posing a challenge to their surroundings - they are doing this, why not we? And in most places it stayed at that. However, in Croatia for one it sparked a small protest movement.

Naturally the protests in Croatia are much different from the ones in Cairo, Tripoli, etc. For one they are much smaller. In a country of 4 million there has jet to be a protest that would break the 10,000 mark. Secondly, their nature is much different. The government of Croatia is deeply unpopular, but it is also democratically elected. The calls of the protesters are not for the forceful overthrow of the government, but for the cabinet to recognise it is incompetent and do the right thing and resign.

So in themselves the protests are not greatly remarkable. What is more remarkable and telling is that unlike virtually anyone else the Croats let themselves be nudged into action by the example of the protests in the Arab World. This is a symptom of the state Croatia finds itself in and the outlook of its populace for their future.

Croatians have to contend with a considerable level of unemployment, high costs of living, moderate doses of poorly concealed corruption and no real growth. This, coupled with some natural propensity for melancholia and long standing acquired pessimism regarding any monetary matters, means they are deeply cynical about the government and the prospects of government, any government, turning things around. Ironically, the same sentiment that brought a small minority out on the streets, is what is keeping many more people off it.

Taking into account that by some polls the prime minister enjoys a 13.7% approval rating and over 70% of the people support the protesters, the size of the protests is very small. For example yesterday in one of the most successful demonstrations a mere 8,000 people marched through a section of the capital city, Zagreb. Though even this may convey the wrong picture of what actually took place. The two hour long "march" could just as easily be described as an evening stroll.

For the most part the deeply cynical Croats simply can not be bothered with demonstrations. No matter how unhappy they are, they do not see things improving no matter what happens with the government.

As for the people marching, the endearing thing about them is their anti-EU stance. Among the standard leftist fare a sentiment prominently expressed on their placards is opposition to Croatia joining the European Union. On the most important issue for the country's future they could not be more right. Perhaps that is a small cause for optimism right there.
Posted by The Hero of Crappy Town