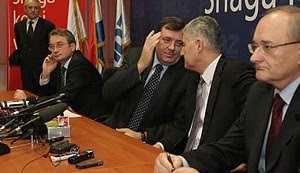 Two months and a half after the elections in Bosnia and Herzegovina an entity level government for the Federation of Bosnia and Herzegovina (the entity which the Anglophone press calls the "Muslim-Croat Federation") is on the verge of being formed. It is to consist of the two main Bosnian Muslim parties (SDP and SDA) and two miniscule Croat parties. It is to bypass the two main Croat parties (HDZ BiH and an offshoot HDZ 1990) which together captured ninety percent of the Croat vote. This means that Croats of Bosnia and Herzegovina are going to be practically without a say in the entity government - the two small Croat parties are nowhere strong enough to serve as anything but satellites to the Muslim coalition.

A Federation government that does not include a party that could represent a large portion of the Croats in Bosnia and Herzegovina would be unusual and alarming. There is a practical issue at hand, Croats and Muslims are both forced to provide the budget for the state, but it is going to be Muslim parties alone that spend it. There is also an important symbolic issue here. The Croats are in the legalistic terms of the region a "constituent people" of Bosnia and Herzegovina. One of the three state-bearing peoples, a sovereign nationality in its own country. Regardless of this status on paper they are now unable to effect even a small amount influence on the government, at its most influential, entity, level.

The Elephant in the Room


Keeping up with the habit of commenting on events no longer current, I suppose the time has come to offer commentary on the semi-recent standoff in Korea.

In the 1950s People's Republic of Korea fought against a US-organised UN intervention that had more than a dozen active participants from Turkey to New Zealand to Luxembourg. Hostilities were brought to an end, not with the signing of a peace treaty, but of a mere cease fire. In the course of the war the United States mercilessly bombed North Korea and essentially erased all of its cities and towns, and killed up to two million Koreans. Since the war ended the US has maintained a comprehensive sanctions regime against North Korea obstructing its trade with the outside world. To this day the US keeps nearly 30,000 of its soldiers in South Korea, with which it has an agreement that in the case of the war restarting its military automatically passes under American control. Also permanently in the theatre is the US Navy's Seventh Fleet with 50 warships and 350 aircraft. In 2002 US named North Korea a part of the "Axis of Evil" along with Iraq and Iran and then proceeded to invade Iraq and to sponsor terrorism in Iran.

Despite all of this when the North Koreans on 23rd November bombarded South Korean military exercise taking place on a disputed island in South Korean hands, killing two soldiers and two civilians and wounding more, the news report all over the world adopted a tone bemused at another irrational belligerence of the nutty Northerners that simply can not lay off from trying to start a war. 'Fortunately' days later the Americans appeared on the scene — a US general visited the island to "inspect the damage" and the US Navy held joint military drills with the South Koreans in disputed waters  — and reminded the world of the larger context.

Unlike what the folk over at LewRockwell.com have been saying (Murphy, Rockwell, Kinsella, Rozeff) Amazon is not, in regard to the WikiLeaks affair, merely a victim of the state. Indeed it is true that if it had continued to host the WikiLeaks website it could bring upon itself the ire of the state. And that at the end of the day it has no obligation to host anyone, particularly when it could find itself under attack by brutes for doing so. However Amazon did more than just cease doing business with WikiLeaks.

Many other companies that bowed to state pressure and stopped their cooperation with WikiLeaks fall into the category of victims. That is because they did so quietly, making it obvious they were doing so for fear of reprisals or controversy. Amazon on the other hand accompanied their cessation of cooperation with WikiLeaks with a slanderous hatchet job worthy of a Fox News talk show host.

Perhaps senator Joe Lieberman demanded of them to cut lose WikiLeaks or else, however the hackery that was their press release for the occassion they published of their own accord. They did not need to beat the drums of the half-witted, anti-WikiLeaks hysteria, they added to it voluntarily when they took the opportunity to feign outrage and try to capture the moral high ground over men far better than themselves.

Part of their press release read:


"It’s clear that WikiLeaks doesn’t own or otherwise control all the rights to this classified content. Further, it is not credible that the extraordinary volume of 250,000 classified documents that WikiLeaks is publishing could have been carefully redacted in such a way as to ensure that they weren’t putting innocent people in jeopardy. Human rights organizations have in fact written to WikiLeaks asking them to exercise caution and not release the names or identities of human rights defenders who might be persecuted by their governments.”

“But, when companies or people go about securing and storing large quantities of data that isn’t rightfully theirs, and publishing this data without ensuring it won’t injure others, it’s a violation of our terms of service, and folks need to go operate elsewhere.”


In the eternal struggle between power and freedom Amazon picked a side. They were not afraid of controversy, but came out with their tongues lashing - spreading nonsense and lies. They can retract their statement, or they are not worthy of being defended by libertarians or any other freedom minded folk. 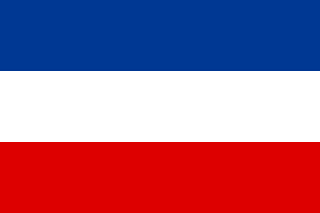 Yugoslavism at its core is an ideology of anti-colonialism. The basic premise is simple. Subject peoples that find themselves in colonial relationship to a power centre, would work together to achieve their liberation. Once free they would continue to cling together in order to enhance their strength and thus be better able to maintain their newfound independence. In this way Yugoslavism is analogue to, for example, Pan-Arabism or Pan-Africanism.

The foremost promise of Yugoslavia was that it would enable the South Slav peoples that would join it to live an existence free of domination from the outside. On this Yugoslavia delivered.

Both of Yugoslavia's two incarnations, wildly different in everything else, existed for almost the whole of their life spans as fully independent entities. The First Yugoslavia was briefly in 1940-41 subordinate to Germany, which was then a European hegemon. The Second was from its inception until the 1948 Tito-Stalin split (which was really initiated by Stalin rather than by Tito) ruled by what amounted to the local branch of the Comintern. Other than during these two brief episodes Yugoslavia was a country fully in control of both its domestic and foreign policy. This at a time when the same was not true of far larger and more powerful states.