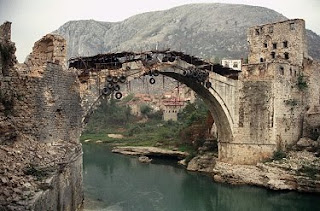 Many people who know only one thing about the Croats of Bosnia and Herzegovina know they blew up the Old Bridge in Mostar. It is a consequence of wartime propaganda effort of their wartime enemy, the Muslim Sarajevo government, and of its Western backers.

In the propaganda narrative, as their most irrational and hateful act the Croats offended by this multiculturalist symbol relentlessly pounded and finally destroyed the centuries old bridge of no strategic relevance, only of great symbolic importance. To in this way crown their previous heinous acts: turning on their former Muslim allies in a surprise attack, ethnically cleansing western Mostar and mercilessly shelling eastern Mostar. All in their nationalistic hatred of the multi-ethnic vision of Bosnia and Herzegovina that is unfortunately only held by the tolerant Muslims of Bosnia and Herzegovina.

To this narrative — conceived locally, but really given life in the enunciations of the Bosnian Muslims' Western advocates — the destruction of the bridge is central. It is a trump card to definitely establish the moral high ground of the Muslim side in the war in relation to the Croats. One that seemingly voids the need for any further discussion, or the need for evidence of other much more serious allegations.

For if the Croats were indeed so hate driven as to destroy an architecturally remarkable 400 year old bridge for no other reason than that it was a symbol of multi-ethnic tolerance, whereas the Muslims did their utmost to protect such a symbol, then it makes all further discussion pointless indeed. It comes natural that Croats imagined in such a way would do all the other things accused of, while the Muslims would be their victims only.

The Old Bridge in Mostar, routinely placed on a pedestal as a cultural landmark of extraordinary importance to "Bosnia" was never such. To begin with it is located in Herzegovina not Bosnia. Secondly it was the most recognisable landmark of Mostar, but not its only one. Looking at the country as a whole it was only one in a series of prominent landmarks. Its psychological importance to Herzegovians and particularly Bosnians is overstated by far.

More importantly, the Old Bridge far from being a known symbol of "multiculturalism" or "multi-ethnicism", was just a bridge. It did not serve as the embodiment of any particular ideal or world outlook. It was merely an old, pedestrian, stone bridge. Architecturally and historically remarkable, but just a plain old bridge nonetheless. In fact it could decidedly not have embodied "multiculturalism" or "multi-ethnicism" for at the time these terms would be foreign to Herzegovian ears. They are western terms introduced locally only in the 1990s. The equivalent term in use in Yugoslavia was "multi-national" ("višenacionalno"). But why would a 400 year-old Ottoman era bridge be a symbol of "multi-nationalism" of all things?

The bridge was not destroyed for what it stood for, but for what it was being used for. The bridge was a logistics route for the Sarajevo government army. In addition to the Mostar on the left bank of the Neretva river ARBiH also controlled a thin strip of land on the right bank of the Neretva. The Old Bridge was one of only two bridges connecting this block to the larger Muslim controlled area on the other bank and was used to move troops in and out of it and to replenish their supplies — spent in bitter urban fighting where the Muslim and Croat zones of control met. As such the remarkable thing about its destruction is not that it came about, but that it did not occur earlier than November 1993, almost a year into the Muslim-Croat war in Bosnia and Herzegovina.

If the bridge was indeed a dear and crucially important symbol of "multiculturalism" to the Muslim side, why was it being used for military purposes thus risking its destruction? Would it not be logical for them to then safeguard the bridge by promising not to use it to move military personnel and material, in turn demanding of the Croats to leave the structure unmolested? No such offer was ever recorded. Whatever its symbolical value, the Muslim side too found its military value greater.

The obvious retort is that while the bridge may had been a legitimate military target it was in addition to that also a symbol. And that since the Croats did not destroy it with a heavy heart, but reveled in its destruction they had nonetheless revealed themselves as irrational, hate driven enemies of multiculturalism and its symbol.

It is true that the Old Bridge while just a bridge before the war, in the course of the war after much heavy fighting and bitterness became a sort of a symbol. But certainly no symbol of "multiculturalism" — a non-existent ideal for foreign consumption only that nobody on the ground was paying any mind.

The bridge was built in a clearly Oriental style, at the height of Ottoman power, during the reign of Suleiman the Magnificent who had laid siege to Vienna. To the Muslims the bridge was a reminder of what they see as their golden era, the era of Ottoman rule in the Balkans, incidentally or not, also the era they had been made privileged and set above the local Christians.

To the Croats it was now also a reminder of the Ottoman era. A reminder of centuries long subjugation and hardship. Naturally then at the time when the bridge fell most local Croats could not see it collapse soon enough and not only for its military value.

Its fortified towers to the each side of the Neretva had served the Turkish authorities as guard posts and gunpowder magazines. Jet the bridge, an inanimate object, was never a party to their oppression. And indeed, the local Croats did by all indications not resent the bridge in 1878 or in 1918 when they could have conceivably demolished it without repercussion if they so choose. But somewhere between the first and the last of the 150,000 Croats driven out from Bosnia by Muslim forces, many of which were extricating themselves by way of Herzegovina and passing nearby, the bridge became a target of resentment.

As was the case with other Ottoman public works projects of the time, forced labour was used for the building of the Old Bridge. This burden fell on the local Christians exclusively as Muslims were exempt of the obligation. The Christians in the Ottoman system were also subject to a heavier tax burden. The Old Bridge was Oriental in appearance, but it had been built, and largely paid for by the local Christians. The Muslims may have appreciated the bridge, but it did not belong to them. It belonged to the descendants of the people who had been forced to build it. The Croats of the Mostar area. It can be argued that it was unfortunate that they came to resent the bridge, but whatever reason they blew it up for, it had been theirs to destroy to begin with.

Imagine an analogue situation where in some hypothetical variant of the future there arose great tension between the Black Americans and the US federal government, and the Black Americans burned down that most prominent Washington landmark, the White House, now recalling that it had been built by slave labour and therefore is a symbol of oppression and anyway theirs to burn down.

Funnily enough, it is the destruction of the bridge, rather than the bridge itself that could, if one was so inclined, be spun as a symbol of multi-nationalism. The names of the three man crew of the T-55 tank that collapsed the bridge had long been established with a high level of certainty. It turns out that the HVO crew was made up of two Croats and one Muslim. How is that for Bosnian-Herzegovian multiculturalism in action?

The war in Bosnia and Herzegovina saw barbaric acts take place, however the destruction of the Old Bridge was not one such. The mystique built around it is misplaced. Better that such attention had been given to the numerous razed mosques and churches for example. But then it might be discovered that all warring sides razed sacral objects which would interfere with a construction of a Manichean good and evil propaganda narrative of the war useful to intensify the level of Western interference. It is difficult to believe they actually cared about some local Balkan landmark beyond its usefulness for that. They survived just fine when a few years later NATO was destroying landmarks in Serbia, such as the elegant Freedom Bridge bridging the Danube at Novi Sad, or the 203 metres tall Avala Tower, the tallest building to ever be destroyed in aerial bombardment.
Posted by The Hero of Crappy Town