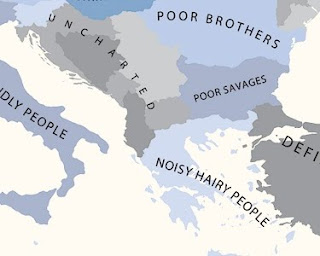 Perhaps you have recently stumbled upon "Mapping Stereotypes" on the internet. A humorous project by a Bulgarian artist reached internet renown, as it received millions of visits and was reported on by the paper press. A play on the old 'World according to the US' jokes it pairs geographical areas with stereotypes for the area according to various mayor nations.

One interesting thing that it shows is the level of uniformity of stereotypes across Europe, in Germany, France, Italy, and Britain, relating to the Balkans. In all of the aforementioned cases the (western) Balkans are simply paired with the sign "uncharted". This indeed is the fundamental characteristic of the Balkans in the Western imagination. The image of underdeveloped, warlike semi-savages takes only second place to the image of the Balkans as unknowable by its nature, a convoluted mess impregnable to outside understanding. An idea that certainly does not encourage anyone to study the area, but on the contrary provides a good reason why not to study it. It is pointless to do so!

Not only does the West recognize that is ignorant of the Balkans, but consoling itself with the idea that the Balkans are simply beyond comprehension, it is also determined not to learn anything about it. This would all be fine and well, but for the fact that the Balkans remain an area of Western intervention. To interfere with a region that you insist is outside your ability to comprehend - surely it is not a good idea.
Posted by The Hero of Crappy Town

Email ThisBlogThis!Share to TwitterShare to FacebookShare to Pinterest
Labels: Balkanism