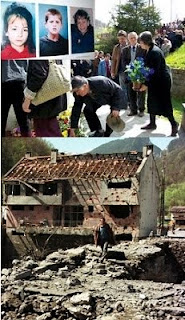 Speaking of governments of East European states that are anxious lapdogs of the Empire one can not but be reminded of the worst of them - the government of Montenegro. Since this spring it has a platoon worth of soldiers serving as auxiliaries to the imperial legions in the occupation of Afghanistan. A symbolic sized contribution to be sure, but from a state whose military is similarly symbolic. And besides it is the principle that matters.

These auxiliaries are in Afghanistan in support of a mission as part of which innocents are casually blown up from the air over and over again. Jet just barely ten years ago these same killers would have been flying over Montenegro doing the same.

In 1999 NATO countries bombed FR Yugoslavia of which Montenegro along with Serbia was a constituent republic of. In a bid to try to sow division among the two, the aggressors bombed Serbia much more heavily than Montenegro. However they reigned tragedy in Montenegro as well.

In the most infamous and gruesome attack NATO planes killed six and wounded that number of civilians in a village of Murino of around 500 inhabitants in the south and east part of Montenegro toward Albania. Among the killed were three children aged between 10 and 13. They were "collateral damage" to a strike on a stone bridge in a mountain village in the middle of nowhere. In the eyes of the bombers their lives were worth less than to accomplish the mission - to demolish a small bridge of not even the slightest strategic relevance.

Yet 10 years later, the sycophant government of Montenegro is not just asking for admission into the unrepentant NATO circle, but doing what it can to help it as it reigns such death upon Afghans and Pakistanis. It is utopian to expect of governments to conduct themselves with any amount of honour. But the conduct of Podgorica is shameful even far beyond what is the norm for politicians.
Posted by The Hero of Crappy Town 2 comments 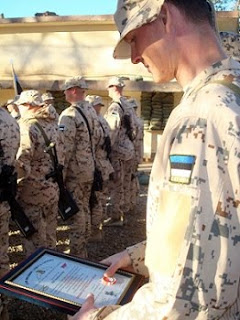 Among the 15 foreign troops killed in the last two days in Afghanistan was also a 20-year-old Estonian sergeant. A reminder that in Afghanistan find themselves also those who should really know better. Many Estonians, Latvians, Lithuanians, Georgians, Azeris and Armenians conscripted to the Soviet Army took part in the Soviet War in Afghanistan in the 1980s. Now their governments send their troops to fight in the American War in Afghanistan. Troops which sometimes have personal experience of the Soviet War. Estonia specifically suffered eight dead so far in this war, while 17 Estonians were killed in the Soviet one. The others have combined suffered only one fatality owing to the fact that they are stationed in the north of the country that does not see much fighting.

One has to be critical of the participation of the Baltic countries in the occupation in particular. They maintain that their nearly fifty-year experience in the Soviet Union was intensely negative. And they refer to this episode of their history as the period of "Soviet occupation" to be better able to convey just how negative they feel it was. Jet their governments were anxious to take part in occupations of Afghanistan, of Kosovo, of Bosnia and Herzegovina and of Iraq. Is there something that makes them think they have more right to send their troops into these lands than the Soviet Union had to send its into theirs?

Additionally, was not local boys dying in distant Afghanistan for no good reason one part of the intensely negative Soviet experience? What has changed?
Posted by The Hero of Crappy Town 0 comments