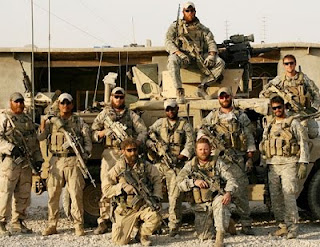 Did you know that while the Empire's Afghanistan surge has admittedly been a failure in most respects, one aspect of it has worked really well? Its death squads have proven very successful. This straight from the NYT. (Naturally the NYT is much too cultured to call a death squad a death squad. Instead it talks of a "Special Operations team" and "targeted killings".)

You have to wonder about the moral state of a place whose newspaper of note writes an upbeat piece about the policy of its government operating a death squad 6,000 miles and two oceans away from its frontiers. American death squads claiming to have hunted down over 130 alleged Afghan resistance commanders, none of which had anything to do with the 2001 terrorist attacks on WTC, why how wonderfully marvellous.

Of course no actual proof is given for the claim that they "turned out to work well" either, except for a claim by an unnamed "senior American military officer" who told the reporters of Taliban fighters who are fearful of moving into higher-level command positions and another equally unnamed "senior White House official" who tells us “If I were the Taliban, I’d be worried.” Yeah. And if I were a news reader I'd want a comment on the scheme from an actual Taliban, not from a figment of some paid-for hack's imagination.

In reality any such programme has an Achilles' heel the size of Oregon. To not be counter-productive it has to be paired with good intelligence. Something the Americans do not have in Afghanistan for certain. We can know this easily by the simple fact that approaches to Kabul are not adorned with pikes hoisting the severed heads of Mullah Omar and Gulbuddin Hekmatyar.

But hey, with Marja a "bleeding ulcer" and the announcement of a Kandahar offensive being met with the insistence of the locals that they would sooner not be liberated, the occupation needs a bright spot, even if it consists of a shadowy special forces outfit working their way down a death list based on questionable intelligence. And since the article's pitch is how the US efforts are going to force the Taliban to negotiate it has the added benefit of not having to be proven - because unlike the outcomes of large sweep operations its results, or the lack of thereof, are not visible to distant observers.

Reality is such that the US, to the frustration of its junior partners in crime and its marionette in Kabul alike, had so far been the party uninterested in meaningful negotiations. The US likely though it would instead better its negotiating position with the escalation and talk only then, or even not at all. But since all its attempts at actually gaining a better position for the talks have only served to demonstrate its impotence it is now, as far as it can be seen, simply making up victories to fool its domestic audience, so when and if it does enter talks it will seem a victory of the escalation rather than its defeat.