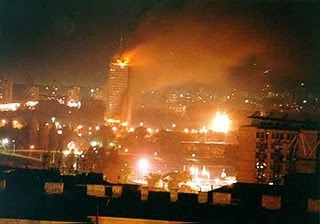 Terrorism is a tactic that strives to accomplish political goals by attacking civilian targets. It is a tactic that is to resorted by entities that feel they lack other means of bringing about their goals. Terrorist groups feel themselves too weak to battle armies and so battle civilians instead. States, however, may likewise find themselves unable to defeat an opposing military force and to respond with a shift to targeting civilians. One such example, of states battling civilians rather than the military, was NATO's bombing of FR Yugoslavia in the course of the Kosovo War.

For its own political reasons NATO was unwilling to risk its forces incurring any losses in the war. Subsequently it conducted all of its bombing from attitudes above 5,000 metres, which was beyond the effective range of most anti-aircraft weapons in the possession of Army of Yugoslavia (VJ). Unwilling to descend below 5,000 metres, however, NATO likewise found itself unable to degrade the military of its enemy. Of some 580 VJ fatalities sustained in the course of the bombing less than one half were inflicted by NATO aircraft. The rest of the fatalities were sustained in battles with the KLA.

These battles were relatively bloody, but did not affect the overall Serbian strategic position. When the bombing campaign commenced majority of KLA fighters withdrew from Kosovo. The remainder was broken up into small bands which were without ability to coordinate among themselves. Offensives launched from Albanian territory into direction of Kosovo-Metohija by KLA fighters supported by Albanian artillery and NATO aviation were stopped in their tracks by relatively small forces that were not highly vulnerable to air attack.

Neither NATO attacks from the air nor the KLA attacks on the ground proved capable of endangering VJ control of the province, or of diminishing its strength. It was probably within NATO's capability to damage the Serbian military from the air, but this would have entailed risking significant casualties of its own. Unwilling to do what it would take to battle the military of the defending country NATO turned to battling its civilians.

A welcome piece at lewrockwell.com this weekend explains that while the well known science fiction writer Robert A. Heinlein while very popular among libertarian readers was not actually a libertarian himself. This is something I have known for a long while, since I read his USSR themed essays from Expanded Universe which are mostly about how he travelled around the Soviet Union doing his best to act like a jerk. Not a libertarian, Heinlein was a vaguely free marketeering Cold War sabre rattler. 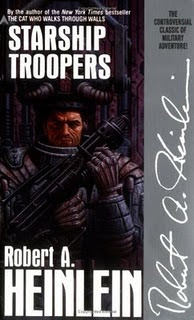 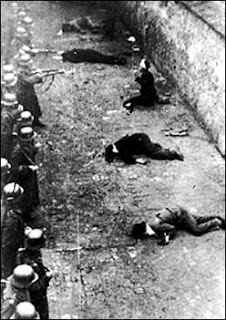 The classical terrorist in the movies is a hostage taker. This is fitting enough since all terrorism is creating a hostage situation. Including state terrorism which makes up for majority of acts of terrorism in the world.

An early form of state terrorism was practiced by US cavalry regiments which would stage so called "punitive expeditions" during the Indian Wars. In them they would fall upon an Indian village killing whoever they could get their hands on. This was usually done after Indians had risen in revolt as part of which they would often massacre settlers, which provided the apparent rationale for the punitive expedition, to compel the revolting Indians to desist from rebellion.

The method was recreated by the British in an industrialised manner in the course of the Second Boer War. Here the British systematically destroyed crops, livestock and homes of the Boers then rounded up Boer women and children and drove them into overcrowded concentration camps where malnutrition and disease were rampant. There they were held hostage until the Boer men gave up and discontinued their guerrilla campaign against the British.

Germany during the Second World War embraced state terrorism on a massive scale. Possibly the most unambiguous example of it is to be found in its conduct of occupation of Serbia. Here in October 1941 in just one three day massacre in the town of Kragujevac and the surrounding villages approximately 5,000 civilians were rounded up, then killed in mass executions as a way of compelling the guerrillas attacking the German troops to cease.

It should be apparent about all of the three examples above that they are hostage situations. This is what terrorism is. Punitive measures applied collectively against civilians and the threat of there of, not as a goal in itself, but as an instrument of compulsion. Non-state terrorists usually employ terrorism as a way to compel a state to desist from occupation. States on the other hand most often employ terrorism to compel guerillas to desist from resistance to occupation.
Read more »
Posted by The Hero of Crappy Town 0 comments 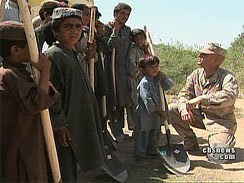 These days in the news a glimpse into the life of Marines enforcing the occupation in Helmand's newly occupied district of Marja:


"We've been here for a month, and we’ve been in more firefights here than we have during the rest of our time in Afghanistan,” said Cpl. Anthony DePrimo, squad leader of India Company’s 3rd Platoon, 3rd Squad, which was involved in the May 19 firefight. 'You never know what’s going to happen here.'"

"Outside the wire, action has been more predictable. Patrols are regularly ambushed within a few hundred meters of the schoolhouse, with anywhere from three to 10 Taliban gunmen opening fire on Marines at a moment’s notice."

In a utterly predictable outcome the taking of the district in the "Operation Moshtarak" seems not to have represented a turning of a corner of any proportion, but has rather opened up another ultimately unwinnable front, and provided more and closer targets for the guerillas who are not giving up.

There was no reason to come in, but now there is some reason not to leave. The taking of Marja was done primarily for the benefit of the public opinion in the US, to show it that progress could be made in Afghanistan. Jet before that nobody in the US had the slightest interest in Marja, in fact nobody knew it existed. It could have stayed Taleban controlled for the next three thousand years and nobody would have lost sleep over it. It became important only once Pentagon built it up into something important. But now that is where it is at and to ever have it retaken would represent a significant blow to the occupation on the moral level.

Jet the pro-active occupation devoid of other ideas had announced months ago Marja had only been a dry run for a much larger effort directed at Kandahar in the summer where the same recipe is to be used. Which is bound to bring about the same sort of situation but on a far larger scale.

In this way the Marja situation is also a microcosm of the Afghan escalation. Before it Afghanistan had been a side show, the Western forces could have withdrew at any time and as long as Karzai would have stayed the mayor of Kabul the world would have hardly noticed. But now, after such investment anything short of unambiguously clear victory, which had always been unattainable, is going to attract attention and be recognized in the world for a defeat.