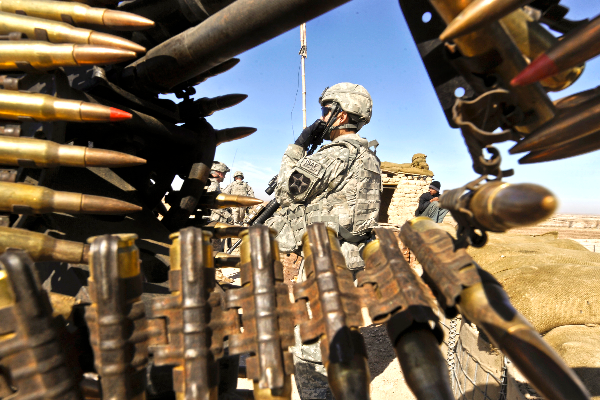 It has been reported that the honchos running the occupation of Afghanistan are discussing introducing a medal for "courageous restraint". It would be handed to soldiers who do not take action that they are permitted under the (notoriously unrestrictive) "rules of engagement" in case that doing so could endanger civilians. For example, not opening fire on cars that approach a checkpoint or a military convoy with a speed greater than that which they deem acceptable. This in a nutshell is all one needs to see that imperial propaganda about Afghanistan is a farce. It reveals in of itself the imperials are the farthest thing from liberators there.

If the war was taking place in the US would the American troops need to be seduced into not "lighting up" civilians on checkpoints in Kansas or Idaho with medals? Of course not, among their people courageous restraint would be the default. Not to kill the people you are tasked to defend would not be seen as being meritorious, it would be the norm. If someone were to panic and shoot up an American civilian it would be understood he deserves a court-martial for cowardice and the harm inflicted, not just loose out on a bogus medal.

It shows the hypocrisy of the people running the occupation. On one hand they hand down instructions to their triggermen that allow them free reign and on the other they plan to entice them to refrain from shooting at everything that could conceivably be a threat with pieces of tin. The truth is that the occupation is not actually highly motivated to cut down on such incidents. If if were it would hand down new instructions to its rank and file, ordering them to refrain from opening fire in the circumstances when doing so could result in them harming the very civilians on whose behalf they claim to be in the country for.

This however, would require a systemic change. Currently the US military trains its troops to be as aggressive as possible, to shoot rather than be in doubt, to never hesitate and to feel no remorse. It is a culture the American military in particular works hard and very successfully to engrain in its troops in what it imagines is a way of increasing their efficiency and shortening casualty lists. But once this has been accomplished its troops expect to work in such an institutional environment where they are given a wide amount of leevay and are not "second guessed" when they go about their soldiering the way they have been trained, that is as aggressive and callous killers. As a consequence to demand of the soldiers that they show a great amount of restraint in a war zone would create a great amount of discontention among them.

It is true that in the long term the occupational troops with their indifference for the lives of occupied civilians work to make their own existence there more perilous as they turn the population against themselves. But this is only true in the long term. Because in a war such as this it is not always possible to right away know who is a threat and who is not, the guarantee that they will not be prosecuted or have their actions re-examined in the short term, however, grants them an added sense of security. A sense of security that they need in order to go along with the wars of the empire. A soldier is unlikely to concern himself with the outcome of an enterprise such as an occupation. For the most part he is merely looking to finish his "tour" in one piece. His outlook is extremely short term. Even if he is aware that his actions today may lead to increased anger of the populace and more attacks on the troops these are just as likely to fall on neighbouring units or those that will follow after his own.

The enlistees let themselves be shipped around the world, put in dangerous situations, on bizarre rationales and in return they receive considerable pay and a carte blanche to do whatever they think is necessary to protect themselves should they feel they are in danger – regardless of whether the danger was actually present. Deprive them of their carte blanche and instead demand they put the lives of the local civilians before their own and they would be far less willing let themselves be shipped around, enforcing occupations. And how then would the empire prolong itself?

The likes of checkpoint slayings hurt the occupation, but this type of grumbling disaffection and the subsequent decrease of the lure of soldiering profession would hurt it more. In a trap of the military's own making any attempt to now expect that the rank and file demonstrate a certain amount of restraint and show some regard for life of the locals – even at their own expense – would be seen by them as the brass taking away their means of protection. For this reason we will never see the only thing that could truly improve the welfare of the affected civilians – the rules of engagement that are not already criminal in themselves and a change in culture to accompany them. But it makes one wonder. When the Taleban set up a checkpoint of their own, do their rank and file, so as not to callously kill their own civilians, also need to be enticed with medals?
Posted by The Hero of Crappy Town