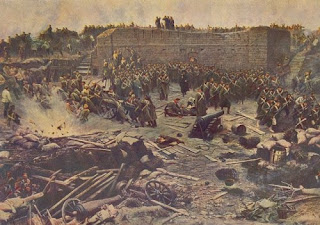 Ukraine and Russia recently reached a deal by which Ukraine agrees to extend the lease on the Sevastopol naval base for another 25 plus 5, while Russia agrees to deliver natural gas to Ukraine at a 30% discount. This discount will amount to a subsidy of 3 billion dollars per annum. This rather than a deal that will benefit both sides is a deal that will have a detrimental effect on both.

Sevastopol, which is a predominantly Russian city, has a remarkable history intertwined with the history of the Black Sea Fleet. Its very founding was as a base for the newly founded fleet to operate from after the annexation of Crimea in the 18th century. It was besieged by the French and the British in the Crimean War and by the Germans and the Romanians in the Second World War. In both instances it ultimately fell, but not before the defenders exacted a heavy price on the besiegers. In both instances the sailors and the marines of the navy played an important role in the ferocious defence of the city. It is natural that the Russian Navy would desire to be based from here.

The problem is that Russia is not in the position to be handing out billion dollar subsidies. Russia's own navy is the military arm that has seen the steepest decline since the Soviet years. In the last ten years it has received only four new ships. Many of its remaining vesels are approching the end of their life spans. Instead of worrying about the basing for the Black Sea Fleet beyond 2017 the Russian government would do better to worry about still having a respectable fleet to base in the Black Sea past that time. The 3 billion dollars per annum could instead go toward towards procurement of new vessels and the expansion of its naval base in Novorossiysk.

Or even better it could go toward an investment into the living standard of Russians. Why not a tax rebate to the tune of 3 billion? 3 billion spread over 150 million Russian citizens may not sound like much, but then this is 80 dollars per family per annum. Given the option would Russian families really choose to spend 80 dollars every year on a lease on a naval base in Crimea? I think they would not be hard pressed to come up with more immediate needs.

As for Ukraine, the problem is that Ukraine as it is now could not actually afford to continue to pay the market price for its natural gas. But that is just it. Ukraine is a state which is permanently in crisis of this sort or the other. Its government needs to learn to live within its means instead of relying on Kremlin's largesse to make up for the shortfall. Since the subsidy lessens the pressure on Kiev to get its house in order it is - however intended - not going to prove to be a favour for the Ukrainians.
Posted by The Hero of Crappy Town 0 comments 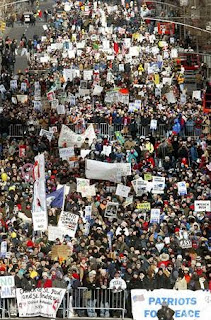 Last month saw the anniversary of the American 2003 invasion of Iraq slip by almost unnoticed. A part of the reason why this can happen is that at the time the attack was expected for a whole preceding year. So sustained and long-lived had been the propaganda of the aggressor and so brazen its intentions.

Let us recount. In the opening stage of the 2001 Afghanistan War the American expectations were of a relatively long-winded conflict. The war was being fought by Americans from the air and a coalition of militias which had lost the Afghan Civil War and had been bottled up in the north of the country ever since on the ground. Retired US generals spent their time in TV studios explaining that the immediate goal for the US was to take one mayor city before the winter sets in in order to shore up the confidence of the outnumbered Northern Alliance. The main push to evict the Taleban government would follow later on in the spring. However, as this first goal had been accomplished with the fall of Mazar-e-Shariff in November the Taleban broke and vacated the battlefield leaving the enemy with an unexpectedly easy and speedy victory.

Come spring instead of an offensive in Afghanistan there was talk of another war. The post-9/11 America had not yet satisfied its bloodlust. Its war in Afghanistan, while apparently successful, finished in a markedly anti-climatic manner. Besides, with only a few elite American units on the ground, and the planes in the air largely running out of targets to bomb in a matter of days, it had been, from the perspective of a TV viewer, an uneventful, low intensity war. This would not do. More was needed.

Attentions of Americans were quickly transferred to Iraq in a process that kicked off with George Bush's infamous "Axis of Evil" speech that took place in January 2002. By that spring it had to be clear to anyone who was paying attention that the US was searching for a pretext to attack. And by fall, when the war propaganda returned after a lull for the vacation season, it had to be clear to anyone that the war was going to take place whether the US succeeded in manufacturing a marketable pretext or not. The only real unknown was for how long the theatre about the worry over non-existing chemical and biological weapons would be kept up before the invasion would be launched. Soon thereafter this was narrowed down as we learned about the "weather window" in which Iraq can be invaded before the combination of heat and dust storms makes the job of would-be conquerors of that part of the world harder.

In the end the war was launched on 20th March, after more than one year of propaganda for war. The operation was to open up with an ambitious, and birdbrained, "Shock and Awe" approach that called for such impressive-looking displays of power that they would supposedly stun the enemy into surrendering. The US invasion employed 300,000 military personal and was reported on by over 700 embedded reporters. Unlike in Afghanistan this time nothing about the conduct of the war could have been said to be half-baked or done reluctantly. This was clearly a war the Empire enjoyed waging. Even so, and despite Iraqi regulars hardly fighting – leaving most of it to the Fedayeen paramilitary – it did not go without setbacks. The second of the three weeks of the invasion was actually spent in an "operational pause" without attempting to advance from the positions already taken. The war was seemingly over after three weeks but not in fact. Somewhere around the time Saddam's sons Uday and Qusay were killed in July it was already apparent that guerrilla resistance was taking shape, and by the month of November, with its then record coalition casualties, it was clear guerrilla was in full swing. America had stepped into a quagmire.

The obvious thirst for war with Iraq that emanated from Washington since January 2002 was in considerable contrast to its much more conservative approach in Afghanistan. In the days and months after the terrorist attack on WTC the US behaved out of character. Albeit it had been served with the best pretext for war in several decades but, albeit normally so eager to wage war, was actually displaying reluctance to commit to the Afghanistan campaign in a mayor way. This enigma was solved later when we learned that the Bush administration had wanted a war with Iraq since the first day of taking power and that this had always been their priority.

This helps shed light on US actions in the fall of 2001. There was no rush to send in significant ground forces, no rush to take Kabul, no prime time footage of US paratroopers parading through Afghan markets. There was to be nothing climactic or overly triumphalist about the war in Afghanistan. Clearly the US government did not want the war in Afghanistan to be an eventful enough war to satisfy the craving for vengeance of the post 9/11, nor did it want for too many of its troops to get physically bogged down in the country so as to have enough soldiers on hand for the adventure that would follow.

At the same it could not resolve the standoff with the Taleban peacefully. Doing so would have sapped much of the rationale for any subsequent wars. If good faith negotiations could be entered into even with the Taleban, then why not with every other adversary? Since this path was never pursued it is not clear if negotiations could have indeed bore fruit and if the Taleban were sincere, but it is undoubtable that following the attacks they were signaling their willingness to hand over Osama bin Laden under certain conditions.

Given the careful way in which the Afghanistan adventure was managed the general public in the US  remained convinced the terrorist attacks in WTC entitled them to launch further wars, beyond Afghanistan. In the midst of all this were millions of Iraqis who, like the rest of us, knew the US invasion of their country was coming for an entire year before it was eventually launched. How is it to live for an entire year in a situation where you know that war is coming to your land? That it is going to find itself under attack by invaders bringing with them destruction, chaos and death and there is no stopping them?
Posted by The Hero of Crappy Town 0 comments