Robin Hood as an Agent of Property Owners 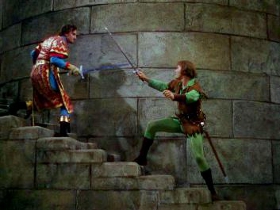 Robin Hood, in the variant of the legend nowadays the most established is a lapsed noble from the period around the Third Crusade who steals from the rich and gives to the poor. Of course during this period in England the poor would be the Anglo-Saxon serfs, and the rich would be the largely Norman nobility.

The relationship between a noble lord and his serfs has many aspects. A lord has judiciary powers over serfs who are bound to his land and are forced to work the castle land and pay a variety of small taxes. However the most important and the most fundamental aspect of the relationship - which in many places persevered long after the formal end of feudalism - is that the lord is deemed to be the owner of land and that therefore the serf in order to pay for the use of the parcel assigned to him must give a part of the produce grown on this parcel to the noble.

Noble's title to land however does not stack up in truth. A person can come in possession of land only by homesteading it or purchasing or inheriting it from someone who homesteaded it. Seeing how land is homesteaded by the virtue of being cultivated, this means the true owners of land in feudal circumstances are the serfs who work it. Nobles do not work the land, nor do they descend from people who had. They come in possession of titles to land by the virtue of inheriting them from their warlord predecessors who imposed themselves on the populace and enserfed it.

Keeping all of this in mind we can see that Robin Hood is not only someone who steals from the rich and gives to the poor, he is also someone who takes from the wrongful property owners to give back to the rightful property owners. He is a hit and run police force working on behalf of the true owners of land against the aristocratic robbers and squatters who enslave them and prey on their property and produce.

So instead of Robin Hood being a renegade working against order, he is in fact better understood as an agent of a natural order based on rightfully gained property who stands in defiance of the wrongful and phony established order because this order itself stands in defiance of a rights based order.
Posted by The Hero of Crappy Town