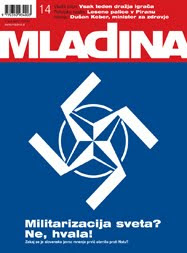 On March 23rd 2003 Slovenians were given a rare opportunity to set back the foreign policy of its political establishment. As American tanks were rumbling through Iraqi sands on their way to finally crush the country their government had been torturing for over a decade, a referendum was held in Slovenia on the question of whether the country should join the European Union and NATO.

The outcome of the vote regarding the EU was never in question. The populace imagined that joining the European Union was going to, or at least very well could, make them wealthy. It would have been useless to ask how exactly this was going to transpire and what about the EU made this a distinct possibility. Seeing the EU was composed of wealthy countries, it was an article of faith that associating with them could somehow make Slovenians wealthier too. There was no understanding behind it, but more of a belief of the sort that once drove primitive peoples to dance for rain. But it did mean that voting against the EU was for most people akin to voting against a better life. There is little wonder then that the vote on EU accession was 9 to 1 in favour.

The matter of membership in NATO was different. As it is merely a military alliance no economic benefit could be expected from it. On the contrary, politicians openly admitted that after membership military expenditures would have to be raised to satisfy the alliance. And for what? Surrounded as it is by friendly countries no one in Slovenia saw a threat that would make entering a military pact and spending more on military necessary. But there was an even bigger stumbling block. While the EU membership meant association with European countries, NATO meant that Slovenia would associate with the United States of America as well. By 2003 this proposition did not necessarily have the populace of this spiritually left-wing country bouncing with joy.

In the years before the referendum the support for NATO membership generally hovered around 40 to 50 percent, with between 25 and 30 percent opposed. This was in circumstances where government and opposition parties droned for the need to join NATO in unison, and no one with real access to the media challenged this notion. In the light of George Bush's warmongering in the Middle East and membership nearing closer, however, more thought was given to the notion so that at one point, less than a year before the referendum, the level of popular opposition and support both met at 40 percent.

In response political parties and embedded media went on an urgent offensive to sell NATO. All manner of constructs were employed. It was claimed that actually economic benefit will be derived from NATO membership seeing it would convince foreign investors uneasy about its Balkan neighbourhood that Slovenia is a respectable, stable country and spur investment from abroad. It was claimed that for Slovenia to be taken seriously abroad it would have to take on sharing responsibilities to secure peace, which is supposedly what NATO does. A perception was being built that NATO and EU membership were two sides of a coin and that it was all but unthinkable to be a part of one, but not the other. In a transparent bluff to try to shake the strong opposition among the young the Ministry of Defence even threatened that if NATO membership did not come to pass reforms to abolish conscription would be halted. Most tellingly of all, the entire time NATO was being disassociated from America as much as possible. It was pointed out over and over again that NATO was an alliance of 19 countries of which the USA was only one and that NATO was not participating in the hugely unpopular invasion of Iraq.

Ultimately it worked and the realistic danger of NATO being shot down at the referendum was averted. After the votes were counted 66 percent were in favor and 34 percent opposed at the turnout of 60 percent. At the same time the victory rang somewhat hollow. All the concentrated, year-long pro-NATO effort had to show for its trouble was 40% of the electorate voting in favour, 20% voting against and 40% staying at home – not exactly overwhelming levels of support. This after millions were spent on various initiatives, round tables, promotions, visits of foreign dignitaries and add campaigns. After years of  anti-NATO position in the media being represented by a single outlet, Mladina, the political weekly of note in the country, and after even the country's Catholic bishops came out in favour of membership.

There was a clear disconnect between the unanimous party establishment and the divided public. The success of the parties rested on the fact that they had access to unlimited funds and that no one with access to the media was arguing against NATO. Meanwhile the government went to such lengths as to mail every single household a propaganda pamphlet paid for by the taxpayers. You do not have to be a libertarian to be appalled by an act whereby a person is forced to finance his own brainwashing. Other tricks they were not loathe to employ were debates televised by the state television where the pro-NATO positioned was argued by politicians clad in tuxedos and used to public speaking and neutrality was argued for by scruffy looking anti-globalists. One does not have to be Karl Rove to see the point of that can only be to equate the cpunter position with the fringe and frighten particularly the elderly against siding with such elements. One has to wonder what would be the outcome if there had been a real debate, instead of than one managed by the pro-NATO establishment.

The biggest supporters of NATO proved to be the elderly, opposition among those above 65 stood at a puny 15%. The young, on the contrary, tended to be opposed. The votes of 30 year olds were split 51-49 in favour of those opposed, for the 20 year olds it was already 60-40. If the vote had been taken among only those born after 1973 the result would have been a solid no.

Obviously 7 years later there are more people born after 1973 around and fewer of those born after. An ageing population or no, in a few years time the majority of the population will have been born after 1973, in 15 more years this will be true for the majority of the electorate. Furthermore, the fundamental reason that NATO membership was opposed was the unpopularity of the United States. It is hard to gauge something like sentiment, but it is hard to believe that years of uninterrupted US warfare since then have done any favours to its image. If Slovenia is anything to go by then the Empire can take political establishment of its NATO auxiliaries for granted, but it would be a miscalculation to presume this servility extends undiminished to the general public.
Posted by The Hero of Crappy Town