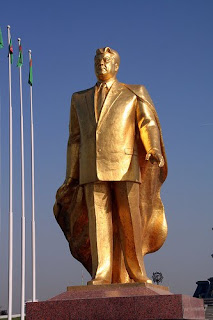 As Mikheil Saakashvili`s rule in Georgia is becoming more dictatorial, the empowerment of his persona`s lunacy is reaching absurd levels. Initially marketed as a modern, slick, clever and educated politician it soon became clear he was not quite all there when he threw his military of 35 thousand into a war against the largest country on Earth.

Recently, in his the most bizzare act jet, he decreed the parliament be moved away from Tbilisi to Georgia`s second largest city Kutaisi. Choosing for it from all the sites in and around the city - one already taken by a 46 metres tall monument to the memory of eighty thousand Georgians who fell in the ranks of Red Army in the Second World War.

To avoid announced rallies against this state vandalism interfering with his reprehensible plan the demolition of the imposing monument was carried out two days ahead of schedule and was so rushed that it resulted in deaths of two people, mother and daughter, that were hit by debris.

In the end Saakashvili desecrated the memory of Georgian WWII fallen to send a message, what message and to whom only he knows, and caused deaths of a woman and a child in the process, jet it has been barely reported on in the West and then only in carefully chosen terms. Too embarrassing for them that their vassal is becoming more and more like Saparmurat Niyazov "Turkmenbashi" or perhaps Idi Amin. An erratic, authoritarian lunatic.

In the mean time official Russia has declared willingness to recreate the monument in Moscow, so the Georgian Red Army fallen may be honoured there if under Saakashvili they can no longer be honoured in Kutaisi.

PS, I should thank Stanislav Mishin over at Mat Rodina for writting about this event or I would have surely missed it.
Posted by The Hero of Crappy Town

Email ThisBlogThis!Share to TwitterShare to FacebookShare to Pinterest
Labels: Caucasus